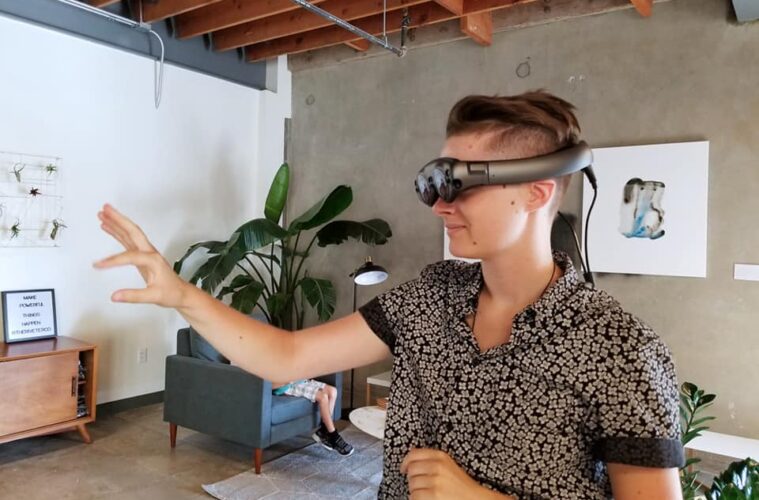 When Helena McGill and Anna Wozniewicz met back in undergrad at Chapman University’s film school, they became good friends early on and started collaborating not only on everything from school projects to independent films. Then, in 2016, they were presented with the opportunity to be a part of Chapman’s first VR project – a big horror film in collaboration with AMD – which opened up an entirely new world of sound mixing.

While the project itself was a rough ride, they couldn’t stop talking about the future of what was to become known as immersive tech: researching local VR companies, attending as many networking events as possible, and being the primary sound designers for the rest of Chapman’s internal VR program.

The company? It kind of just…happened. Noctvrnal started at a tech conference (they got free audio software, which fed their starving student mentality!), where they came up with the name and bought the domain on the spot, right tere in the middle of the trade show floor.

The name “Noctvrnal” was an inside joke. Sound designers are notorious for having the most restrictive sleeping schedule during post production season at film school.
That first year, they pursued as many VR projects as possible, attended multiple events to connect with the growing immersive tech industry, taught themselves the ins and outs of accounting, and figured out a way to work remotely while Anna completed her final year at university and Helena relocated to Los Angeles.

And it paid off. The following year brought them an array of XR projects, installations, immersive theater, and all sorts of weird, experimental sound design.

We sat down with Helena and Anna and talked about storytelling, recent recognition, their co-founding relationship and being women in a heavily male-dominated technical discipline.

Let’s talk about storytelling. What does this mean in your world, where you regularly use XR and immersive tech? Are these types of stories accessible to just anyone? What can you tell us?

We both came from a background in narrative film and storytelling, so the challenge here was translating our skills into a 360 degree environment. Cinematic virtual reality is a very specific medium, so we approach each project asking ourselves why it’s necessary to design sound and music with the viewer in mind. XR is still in its infancy, and every project requires us to come up with a creative solution and different workflow – we’re effectively writing the rules of spatial audio for the next generation of media.

Currently, the biggest barrier to entry into immersive tech is the hardware; most content requires that you own a head-mounted display (HMD) to watch. Because of this, some of our most rewarding projects have been designing audio for physical spaces and location-based entertainment, where participants can interact with our work in real time and share that experience with others.

And what the heck is spatial sound design?

Spatial sound is a powerful tool for immersion, accessibility, and UX design in all XR applications, and allows you to attach audio to specific objects that are then panned around the virtual space. Think Marco Polo – but in VR.

This type of mixing involves a completely separate workflow from what we were used to in traditional media, and it actually closer in scope to designing audio for video games. If there is a human in front of you in an experience, their voice is assigned to their body and will “follow” them as they move around a space, allowing you to effectively navigate a virtual environment just as you do the natural world.

As a team, what are some of the most important pieces of your co-founding relationship?

Mutual trust and effective communication. No business partnership will succeed past the brainstorming phase without those two things.

We were warned by several of our mentors that entering into a business relationship with a close friend was risky, but we never felt this would be a roadblock to developing a strong company – and we’re still best friends. We jokingly refer to each other as “partners, not ‘partners’,” because of how often we are asked if we’re romantically involved – DURING business engagements.

That being said, we’ve definitely learned a lot more about our work and communication styles; we also had to navigate working remotely for a year and a half while Anna finished up her undergrad. Taking the leap into a company, then trusting each other to jump into it full time, and finally getting on solid ground to be able to commit to an office space in Hollywood… that all took a lot of perseverance, hard work, and TRUST.

You’ve both had a lot of focus on women in tech. What do these issues mean to you, and what do you think the problems and their solutions might be? Where do you see your biggest impact being in this area?

Being at the crossroads between three male-dominated industries – tech, entertainment, and audio – has been challenging at times. We’ve encountered quite a bit of ageism in the space, and have had to expend a lot of energy simply proving our worth before we’re taken seriously as engineers and treated as equals and collaborators.

In the first year as a company, we had a handful of colleagues repeatedly ask us if we were “still doing our company thing,” which was invalidating and frustrated us that they weren’t taking us seriously. As mentioned earlier, we’ve also been mistaken quite frequently for romantic partners, and have had to clear that up for clients during business meetings.

One of the biggest problems for women in XR is access – most of the funding comes from men, and fewer women are getting funded than men, which creates a vicious cycle. We’ve found that our biggest projects and repeat clients come from fellow women in the XR space. Whether intentionally or not, women supporting women has been the biggest support system in immersive tech, and we’re very proud to be a part of such a vibrant and resilient community.

Can we get into some recent awesome stuff? Anna, you won a recognition award from the Cinema Audio Society (CAS). What do you credit for you getting you to this position?

First off, I feel so humbled to have won the CAS Student Recognition Award. It was also an incredible feeling being one of five all female finalists. Given that only 5% of audio engineers are female, it was truly the best feeling.

There are so many people I have to thank for getting me to where I am now – my mentors throughout film school, many of which were female, who showed me the ropes, answered my (many, many, many) questions, and got me excited about audio in the first place. Film school played a huge role in getting me to where I am now, but really it’s all the people – mentors, family, friends – who supported me in all my endeavors, even if one of them was starting a company at 20, in the middle of my Junior year of college.