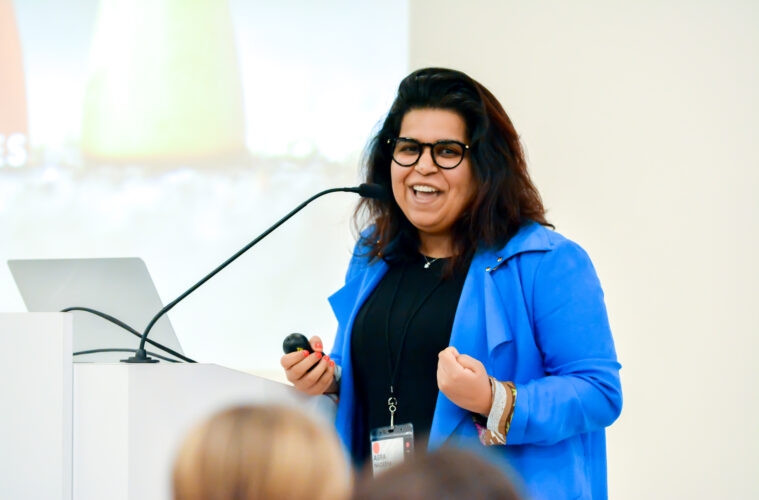 Asra Nadeem, VP of Entrepreneurship Programs at Draper University, presented her learnings on startup burn rates, and how to make sure they stay within your control.

How many of you have access to unlimited capital? None of you, of course!

But it’s a good problem to have, and rockets apparently have the same problem. They have access to very limited fuel. Every time I think, “Oh my God, I’m so broke. I don’t know how to solve this problem,” I always think to myself, “Well, I’m just like a rocket because it only has that much fuel. It needs to achieve that escape velocity. It needs to get out there. And there is only so much fuel that you can burn at each stage.”

How do you figure out how much fuel you’re going to burn and when are you going to do it? It’s a pretty mathematical way of looking at it.

To give you a brief background, Igrew up in Pakistan, and technology has been my way out of everything. It’s been my road to freedom.

I was hired at a startup when I was in college because I spoke really good English. And within two weeks, I was pretty much telling these two guys from Stanford, “You don’t know what the customers want because that’s not what they’re saying.” And they said, “All right. Do you want to be our product manager?” Me? “Yeah, sure. I don’t know what that is, but I’ll teach you how to build this product.”

We ended up building that product, and raised venture capital. And then I moved to Middle East – North Africa – and built online infrastructure for governments there. Came back to the US only to move to Canada, built a game, got really bored, moved down here, worked in venture capital, and figured out that managing other people’s money is not fun.

One of my favorite things I’ve heard in the last couple of years is that growth is a system as opposed to a bag of tricks. When you’re trying to figure out how you grow, there are a lot of things to consider, everything from growth hacking to hustling.

When you stop to think about what you’re really doing, and why you aren’t measuring things, this is where I say plans have plans. How do you do this? What’s worked well is to have a three-month plan and then measure it every two weeks.

To give you an idea, we were building an applicant tracking system, and we went ahead and built everything. We built a shortlisting platform. We built an interview scheduler. We built every single thing and we never talked to our customers.When we presented it to them, all they did was post jobs and get emails. None of them wanted to use the full product we’d spent six months building and used almost half of our money on. So we turned all of those features off.

Finally we decided to talk to them and figure out what it was they were using the most, and we started testing it every two weeks. Now, when they say, “Well, I’d really like to have a shortlisting feature,” we’ll go work on that. Had we done all that early on, we would’ve saved ourselves a lot of time and resources.

So have plans, and make sure you’re measuring every single thing. A good circle for that is to have a hypothesis. And what you need to have hypotheses for is these four sets of people:

So have these hypotheses for every single person and then just keep testing them.

How to hire for propulsion

So hiring a developer who’s an excellent salesperson. Hard to find, but these are going to be the key people who will go out and do great things for you. Or hiring a really good salesperson who isn’t afraid to get in there and answer customer questions or at the same time write SQL queries, write databases, figure out how to code a product.

All these small things add up, and if you hire T-shaped people your product gets much further along much more quickly.

In the beginning, where do you find these people? Where is that gold mine of all these crazy applicants? They’re going to be either within your network or people who know people. It’s never going to be a $700 job on LinkedIn that finds you. I mean, it could. But in my case, I’ve never found anybody like that.

Those four or five key people who are going to go to bat for you and feel the same way are actually going to be people who believe in what you’re building. And that’s extremely important.

Another concept that I personally like is hiring short-term hires. Can these people get me where I need to get in the next six months? And then you grow from there. Hiring the VP of Engineering who hasn’t coded a product in six years is probably not a good first hire.

And of course, measure exactly who you’re hiring, what you’re doing with them.

Then there’s something everybody in Silicon Valley says, “Do things that don’t scale.” But what the hell does that even mean? Yes, it’s not going to scale, but…

One thing that we always forget about customers is compound growth. For example, we were building a matchmaking product for Muslims, because girls are supposed to marry who they want and things have changed. What we found was that if we went online, we were going to spend anywhere from $15,000-$20,000 a month just to find these people.

We formed a hypothesis: “All right. Let’s see where these people hang out.” We went to a whole bunch of matchmaking events where the parents were, and our actual target audience wasn’t really there. They’re hanging out in bars or doing little things outside of that area. $400 of wine and cheese later, we found our first 1,000 users. Those 1,000 users got us the first 10,000 users.

That’s what compound growth or things that don’t scale do for you.

But when you are building a company– I recently met somebody who had spent $7,000 in their first month on all these subscriptions. You don’t need to pay for all these advice softwares from day one. You can always– there’s a whole bunch of credits available. Your friends would know. Your investors would know. Try to utilize those products as much as possible and then build off of them. A CRM that works for you when you have 30 customers where a Google Sheet would work. But that would not work when you have 5,000 or 10,000 users. So grow as you go. And pay monthly for things. Try to be scrappy about them. There is no reason to pay for everything in one go. But at the same time, if there’s something that really brings you that productivity, please go ahead and do that. So again, just a quick quantify. Make everybody pay. Figure out who’s going to pay for it at what stage of your rocket launch. And automate as much of this process as you can. Thank you.