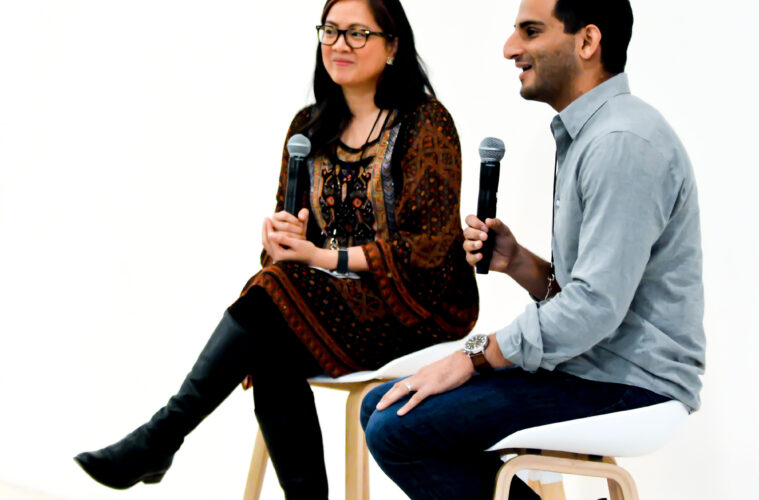 Can you tell me more about your thesis?

Very proud to be here, very excited. We started the firm about five years ago with a very simple thesis: We invest in immigrants and we sponsor visas. We think by having that diverse view, you naturally have more diversity in your portfolio. We’ve now sponsored nearly 100 visas in the last five years. 100% success across the Obama and Trump administration.

We’ve identified untapped potential that may be stuck with an educational visa in the US educational system, or being sponsored at a corporation, and not being able to leave either to start a company full-time company. We feel that if you can grow the size of the pie and give untapped potential the opportunity to succeed, they will succeed faster.

There are some up-and-coming angel investors in this room, as well as emerging fund managers. How did you develop your thesis, and what should we start thinking about as we’re developing our own? What are the types of founders we invest in and what’s important? How should we be thinking about our thesis?

One of my biggest beefs coming as an outsider into venture – though I’m born and raised in Silicon Valley – is that this notion of pattern recognition is a default strategy for a lot of investors. I don’t understand it. As a venture capitalist, my job is to find outsized returns from outliers. So how do patterns work? They don’t.

The way we think about it is, because we invest so early, we’re typically investing in pre-formation. 60% of my investments have happened before the company even has a Delaware incorporated business. We’re really betting on people – not product, not traction, not revenue. What that means is you have to understand the distance they’ve traveled.

Mitch Kapor has written a brilliant piece about this. But an immigrant naturally has a distance they’ve traveled, not in miles, but in the journey. And when you understand that, you understand something called the adversity muscle. The adversity muscle is what we call in America “grit”. I think we’re borrowing it from immigrants, veterans, and athletes because those are the groups of people that have to work extremely hard to find a way to succeed. And so for us to find these outsized outliers is to understand their story. And refusing to believe in pattern recognition in Stanford, Harvard, I work at XYZ company, that’s all great, but not all immigrants get that luxury. Because they may get a full-ride scholarship to the University of Miami of Ohio and gotten into Stanford, but they couldn’t afford Stanford. So that should not be looked upon as a measurement of why you shouldn’t invest in them.

I love that. What was it like to pitch LPs with this kind of thesis?

One of the most common responses I got was, “Doesn’t the best already find a way?” I mean, this valley’s built on the backs of immigrants. Uber, Garrett was an immigrant. Sergey, Google, Steve Jobs, to some extent. You have a lot of great examples of immigrant success.

But when you start to talk to investors, that would be like – let’s take, for example, the baseball saying, “Won’t the best find a way,” before Jackie Robinson. Someone’s got to break the barrier. Someone’s got to think differently. For us, we responded back and said, “Look, you could assume that the venture community is fully efficient in finding the best talent or you can make the assumption that it’s highly inefficient and there’s a lot more talent to be supported.”

When we raised our first fund, which was $4.5m, we had to really convince people to take a bet on us. Not on the thesis, not on the opportunity, but on us. The second fund, we have a little more data. Right? We now have founders from 19 different countries, all six continents. I recognize there are seven. I’m not going to get the seventh [laughter]. 38% of my founding teams are led by women. We’re two male Indians running the fund. 38% of our fund is led by women, and I think the reason is because we just found untapped talent that actually outperforms.

Can you mention some of the LPs that were big supporters of your mission?

We’re super fortunate. Two of our largest LPs are actually women. [applause] One that I can name publicly is Emerson Collective, Laurene Powell Jobs. They’ve been a supporter in the first fund and the second fund. The other one is a very large retail family in this country. And the third one that we usually use is Bloomberg. They’ve gotten behind us as well. So we’re really fortunate, where our key names are the largest tech family, retail family and financial services family. But more importantly, it’s the other 142 that have invested. It’s CEOs of companies like Nurex. It’s the founders of NerdWallet. It’s executives that have been in the finance sector for years. A lot of VC firms, so First Round Capital invested in our first fund. Really fortunate to bring this community of people together to support incredibly untapped talent.

Fantastic. Can you talk us about some of the support you’re already giving to your founders? What are some of the unique challenges you’ve seen as you’ve been talking to them and had this journey as a venture fund?

Obviously we do visa sponsorship. We’ve done nearly 100 filings. But it goes beyond just that.

We talk about the glass ceiling in the United States, it’s a concrete ceiling for most women abroad – you can’t break through. What we had to realize was that it was their grit and adversity that brought them here. Education brought them here. But what they lack is access to networks. The difference between success and failure is not who you know, it’s not what you know….it’s who you know and when.

As a relatively small firm, for us, it’s critical that we can augment these shallow networks that immigrant founders have. It’s a fundamental reality of being in this country for a short amount of time and we’re trying to figure out how to help them move faster.

What we’ve been able to see across fund I to fund II is, in the first fund, the time to next dollar raise after us was approximately 11 months. In our second fund, that’s down to 11 weeks. That’s an incredible change for us to even recognize because it shows that maybe the talent hasn’t changed, but the people’s view of us has. We were actually diversifying selection for our founders, and we didn’t even realize that when they first took our money.

What it comes down to is how do you give them network access that is tangible, that’s supportive. One of the elements is that the political climate has certainly changed over the last five years, and it’s not lost on us that it’s become very binary on whether you want to help immigrants or not. We get to pull on heartstrings, and so people want to give more time to teams with an immigrant entrepreneur. And we’re fortunate, despite the backdrop that we’re in, to be able to provide a solution in this environment.

And for those here who can write the checks, we want to make sure that they’re as diverse as the people that we want to support. So any final words for the funders in this room as they’re thinking about writing those first checks?

But if you can find things that effectively challenge the status quo, look for the outliers, I think you’ll find yourselves a) not only making more money, but b) also valuing your time. There are a lot of people that will respect you for just giving them your time. That’s what I’ve learned in this, that if you’re an early stage investor, you have no idea what $100K could do, especially for somebody that may not have access to even $10K from their parents. Look outside the patterns. We live in Silicon Valley, there’s a lot of good ones. But honestly, I think we got to burst this bubble a little bit to find that untapped potential. And I think that’s the greatest way of supporting.