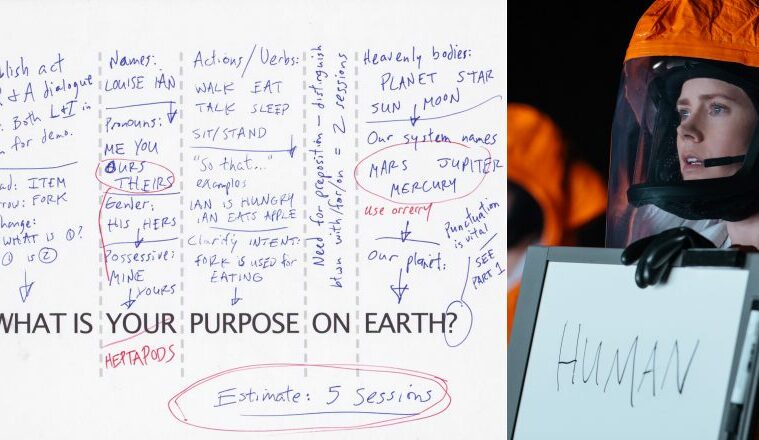 Why Every Diversity Advocate Needs to Watch “Arrival”

Imagine twelve alien spaceships showing up all around globe and you’re the linguist tasked with communicating with the aliens. Now, imagine you’re in charge of your company’s diversity program and your leadership has asked you what your diversity and inclusion strategy is for your company. The two scenarios are more common than you think.

In the 2016 science fiction film, Arrival, Louise Banks (Amy Adams) finds herself in the former position. Without spoiling too much, here are three reasons why every diversity advocate needs to watch this movie and why it’s relevant to your role in diversity and inclusion. (Bonus: The movie features a female protagonist!)

Twelve spaceships in twelve countries means that each country had a different approach and set of biases in communicating not only with the aliens, but amongst themselves. China used games to figure out what the aliens were saying, so that influenced how they interpreted the same message. Louise asked what the Sanskrit word for “war” was. A fellow linguist responded with “a disagreement” while she responded with “a desire for more cows.”    Both are technically correct, but only proved her point that personal bias could influence your interpretation.

You are never going to fully understand every subculture within your organization. That’s ok. Coming to terms with this is half the battle. You will constantly have fundamental differences in defining and approaching what diversity means to your company. It’s your job to understand those differences and communicate them to your stakeholders, which leads to my next point.

One of the best scenes in the movie is when Colonel Weber (Forest Whitaker) presses Louise on getting the aliens to answer the question, “What is your purpose on Earth?” Louise’s response brilliantly sums up my number one frustration with the diversity and inclusion space: ambiguity.

“Okay, so this is where we want to get. Right? This question [What is your purpose on Earth?].

To get there, we have to make sure they understand what a question is, and the nature of a request for information along with the response.

Purpose requires an understanding of intent. Which means we have to find out if they make conscious choices or if their motivation is so instinctive they don’t understand a ‘why’ question, and biggest of all, we need to have enough of a vocabulary with them so we understand their answer.”

I cannot tell you how many executives I’ve spoken to who ask, “How do I make my company diverse?” I usually answer, “Well, what do you mean by ‘diverse’?”

Your leadership probably means hiring more women and people of color. That’s the reality, but you need to make sure that is exactly what they are asking. Creating a common language within your organization is crucial to receiving buy-in and ensuring you are not setting up unrealistic expectations. Make sure you not only understand what they are asking, but also what their purpose, goals and intentions are as well.

In the movie, it took Louise months to establish a common language and to develop a way to respond back. Even though she understood some basic words, the framework to respond needed to be revisited because the aliens used a structure that was completely foreign to humans.

After getting over the initial hurdle of establishing the basics, you’ll also need to constantly revisit what this means for each of your stakeholders. For example, hiring metrics around the number of women in your organization will mean something different for finance versus engineering. While setting broad company hiring goals is important, you also need to contextualize this for each team within your organization. It’s the same message, but it means different things for each group and that can even change over time. Welcome to diversity programming!

Language matters. Hopefully, taking a linguist’s approach to thinking about your diversity programming will help you tackle getting through to the aliens in your organization.