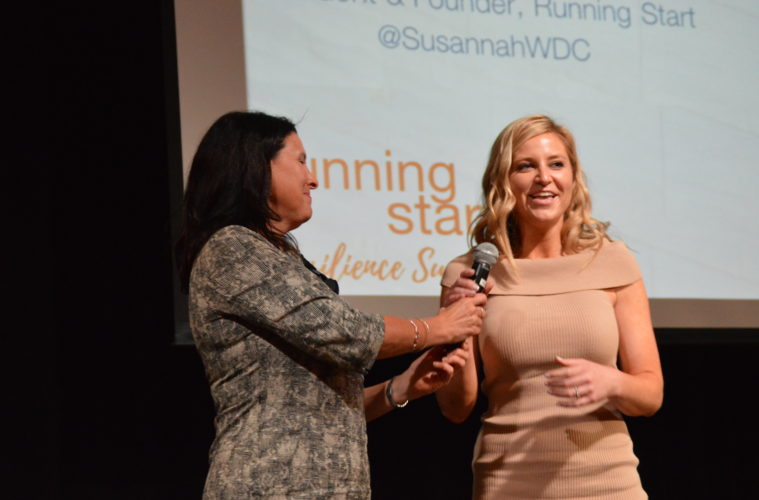 Pink Dresses and Feelings of Insecurity

Last week, my husband Marcelo and I watched the first episode of HBO’s Insecure, which IMDB describes as “follow[ing] the awkward experiences and racy tribulations of a modern-day African-American woman,” Issa Dee. About five minutes in, Marcelo paused the show and said, “I like this, but the title doesn’t make sense. Issa’s so beautiful, how could she be insecure?” Marcelo and I talk about gender inequality on a daily basis, so I knew the question was really a comment meant to start a conversation — one that has continued internally for me all week long.

So, let me tell you about my battle.

I was lucky enough to MC a recent summit for young women on resilience hosted by Running Start. Our original working title for the event was FAILURE because women are too socialized to fear failure (which can hold them back from taking risks like running for office). The Resilience Summit (its final name) was a positive day filled with strong women talking authentically and publicly about bouncing back. I was completely in my women’s empowerment element when a man approached me during the coffee/cookie break to ask why I had chosen my outfit for the day. I told him truthfully that it was first clean thing I saw that I knew fit on a morning when I was rushing to get to work. What I didn’t mention was that a couple weeks earlier I ripped three different pairs of pants in a single week at work. Perhaps they were old, but I had probably also gained weight, so I was trying to avoid wearing pants at public events.

Like many women, I’m accustomed to men making comments (negative or seemingly positive) about my appearance. Whether it’s the cashier at a local 7–11 telling me how much he liked my body (I stopped going to that one) or a man I sometimes ride the elevator with at work who’s said he doesn’t like my outfits or that he thinks my shoes are inappropriate. I’ve learned to insincerely laugh, awkwardly smile, turn away or redirect these types of inquiries or suggestions.

But during that particular snack break, my usual defenses didn’t work. The man kept pressing. Did I choose the dress because it was pink? Did I think it made me look hot? Did I think I was better than the other females in the room? Wasn’t it inappropriate? The dress was pink because I got it for my sister’s wedding reception and it matched what my mother was wearing. I didn’t think it made me look hot. In fact, moments before this encounter, I had been hesitant to retweet a quote because it included a photo that I thought made me look fat (an unforgivable taboo for women appearing in public.) And, the other women in the room (who he referred to as “females”) were my colleagues and friends — my professional network and support system. So, no, I didn’t think I was better than them. But, after all of that questioning, I started thinking that maybe the dress was actually inappropriate.

I finally stopped his questions by saying, “I’m the MC. It’s my event. I can wear whatever I want.” And even though I consider myself a confident woman, I walked back to the stage feeling insecure. It was harder to stand up and introduce speakers when I knew for certain that the negative internal dialogue I was already having about the dress was being reinforced by a man in the back of the room. A man who had paradoxically also just accused me of choosing it because I thought it made me look hot and therefore better than other women, which made it inappropriate.

Although I was distracted by this conversation and by my increasing concern about my appearance, I was also pleased with the day because the Resilience Summit was a tremendous success! The people who spoke (Congresswomen and a Congressman, a Canadian MP, plus business leaders and celebrities) were vulnerable and inspiring in talking about their failures. It was hard not to get wrapped up in their amazing energy. But as we debriefed at the end of the day I had a sinking feeling and even felt compelled to apologize to my team for dressing “inappropriately.” I was worried that I had failed and embarrassed them.

The response of my Running Start colleagues was unanimously supportive and loving. They didn’t think my dress was inappropriate and were anxious to see if we could figure out who the man was. Interestingly, as far as we could tell, he didn’t RSVP or check in. He just showed up. And not only did he attack my dress and professionalism, he had also taken the time to make a strange criticism of the event. He thought businesswomen on a panel who were asked about #MeToo should have been compelled to disclose a specific personal experience because he was so sure they had one, rather than offering their thoughts on the movement. And with me, he won the battle. In that moment, he made me feel insecure about my body and my choice of what to wear.

But I won the war. Because I was the MC. Because the Resilience Summit was a home run. Because I have the platform to write about the experience for POLITICO’s #WomenRule. And because I am going to tweet this article out as a comment on the photo in which I thought I looked fat and then email it to every attendee of the Resilience Summit with pride, hoping he somehow made it onto our email list.

P.S. To Issa Rae (the creator and star of Insecure) and Marcelo, it took me a week to crystallize my thoughts: I hope the show is called Insecure because Issa is fighting feelings of insecurity thrust on her by the world, not because she is insecure. And I hope I can say the same about myself.

This post originally appeared on Running Start, and was republished with permission.