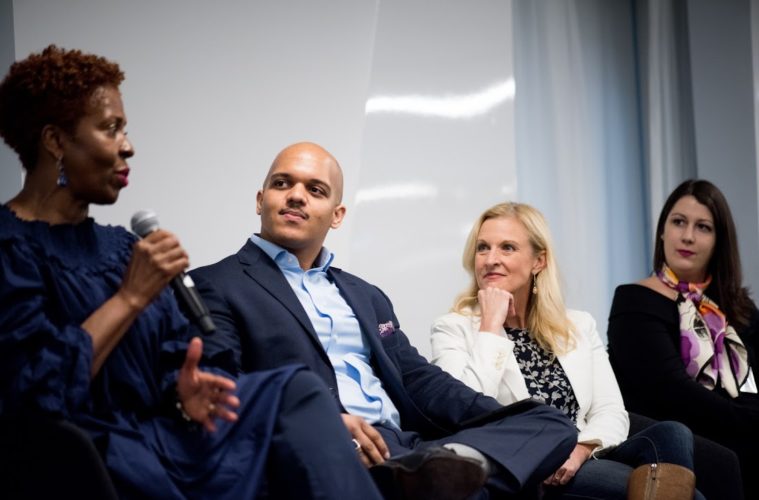 As you know, we care a lot about Allies and their central involvement in bringing gender equality to the tech space and the startup world.

We got to listen in on a great conversation with Avis Yates Rivers (CEO of Technology Concepts Group International and Author of Necessary Inclusion: Embracing the Changing Faces of Technology), Jennifer Brown (CEO of JBC and Author of Inclusion: Diversity, The New Workplace & The Will To Change), Vanessa Alexandra Pestritto (Partner at Lattice Ventures), Chloe Summers (Client Principal at StrideNYC) and moderated by Evin Robinson (Co-Founder of New York on Tech) as part of the AnitaB.org NYC’s Male Ally Summit.

What does male allyship mean to you and what do you think the roles of the males allies are?

Jennifer: True allyship for me has evolved in the last year or two. One or two years ago, it might have been that you’re a champion, but perhaps sitting on the sidelines. What we’ve learned because of the world we’re living in is that progress isn’t going to happen because we’re well-intentioned.

We need to push it to being “evolved”. We need to step in – I want to see proactive allyship. When I’m not in the room, that’s when you’re a true ally, and you don’t wait to ask. You notice exclusion every day and you’re able to have tough conversations with people you see practicing it. Men can watch other men in a really unique way, I want men to learn from men and then lead them.

And those of us male allies need to keep educating.

Vanessa: Male allies is sometimes challenging, it’s based on every day actions. It’s asking things like “why aren’t there people who don’t look like this or that not here?”. It’s about challenging your own biases, reaching out, and being proactive.

There’s a common theme of taking action. Can you give scenarios of when allyship was done correctly, and when it hasn’t?

Chloe: Very early in my career, one of my clients was an older Persian man with traditional ideals. He was known for being dismissive of woman. My boss called up and wanted to take me off the account because he felt it was a toxic environment for me. But that would have set me back in my career by a year, and in either case, I wasn’t experiencing this from the client. I understood what my boss was thinking about – my well-being – but he didn’t allow me the choice.

I asked to stay on the account and actually spoke with the client about some of the feedback… it was feedback he hadn’t heard before.

Vanessa: I started at NY Angels in my mid-20s. Brian Cohen was the Director at that time, and we were all running around NYC with meetings etc. Everyone wanted to talk to him – he’s charismatic and fills the room – but he would always push those conversations off to me, “No, you need to talk to Vanessa”. He pushed the weight over to me, and got over his unconscious bias.

Jennifer: Backfiring language I hear a lot from execs is “meritocracy”… I try to correct this well-meaning description.

It’s not a meritocracy, precisely because we start at different places. To have someone privileged say that is a blind spot.

“I don’t see color” is also well-meaning, but you have to see color, because people of color feel their color every day. If you’re trying to be inclusive of women, read about what’s different between, say, a white woman and a woman of color, and be prepared to support those different types of women.

How should male allies learn to step aside?

Vanessa: Just don’t talk, and let them go forward. All the people around you are professionals, they all need to be collaborated with. To me, there’s no difference. You need to step back and figure out what resources you need and where you can get them.

Avis: That’s a magic wand type of thing, and we’re not there yet. Women’s voices don’t get heard because men keep talking. For our allies in the room, make sure within your purview to stop and notice when these things are happening, and call them out, or make sure there’s space for women.

Chloe: One thing I read the other day was that in a team or meeting with more than eight people, people start talking like they’re on a podium, not listening. With 6-8 people, there’s more listening. Don’t exclude people from meetings, but try to keep them small.

Jennifer: Pay attention to who you’re mentoring and sponsoring. Be aware of who’s getting your time and attention, and who you’re sharing your power with and throwing it behind. Being intentional about who you’re helping and supporting is one of the biggest things allies can do. Are you sponsoring at every level?

No matter what level you’re at, you have more power than someone else. With a quick conversation, you can change the trajectory of someone’s career.

What can companies do to train employees on male allyship? Should we use another word?

Avis: NCWIT did a study on this a few years ago, it’s worth looking at. There’s also unconscious bias training, and putting in place measurement and metrics so it’s not just a lofty goal, but also measurable. In that NCWIT study, the men who were studied talked about things that they were completely unaware of. A lot of our structures inside companies were built by white men for white men. When someone else enters that organization, they’re going to feel things. I advocate that men seek out a sponsor that doesn’t look like them.

Jennifer: In the LGBT community, allies were originally straight members working within companies. A lot of people identify with that. Companies are now taking that ally concept and spreading it out across all underrepresented groups.

Chloe: Being aware that things happen is important. The slights do happen around you, and understanding it, seeing and doing what you can in the moment is important. A lot of the people in this room are in leadership positions or will be. You need to look at company culture – your values are so important for promoting D&I.

For instance, the language of your job descriptions can be overtly aggressive, which boxes women out. A really interesting thing I learn about minorities, when you have a population of people in your community that take up under 5%, that group doesn’t like to be called out. Once you hit that 5% mark, they want to be seen and recognized.

Vanessa: It became quite a big trend a few years ago to have the one black person all of a sudden in charge of D&I. That’s not right.

Chloe: As a country, we keep villainizing the white older man. Do not feel that way. It’s about changing the equation to “I DO have this advantage, what can I do with it?” Don’t shrink back from your potential power.

Jennifer: I’ve been talking about the fact that everyone has a diversity story, even the people who don’t think they do. The ability to be vulnerable, and use that as a way to lead can be powerful. Think about your own diversity story. People you’re leading need to see you in that place, it helps them think their voice could be heard. Having leaders “go first” and be vulnerable, you’d be surprised at the energy it creates. It opens the dialogue up. Take a risk in your story-telling.

How can male allies be more transparent and open, and how can we make other allies understand they aren’t loosing out on anything?

Avis: I spoke a few weeks ago, mostly men, and I got the last question “so I guess we should just expect to throw away our careers”. What we need is for people to understand that he isn’t being diminished by sticking up. The whole room realized where he was going, that this man thought he was going to be marginalized as a white man, and at all of his opportunities would go away. But what’s the end game?<