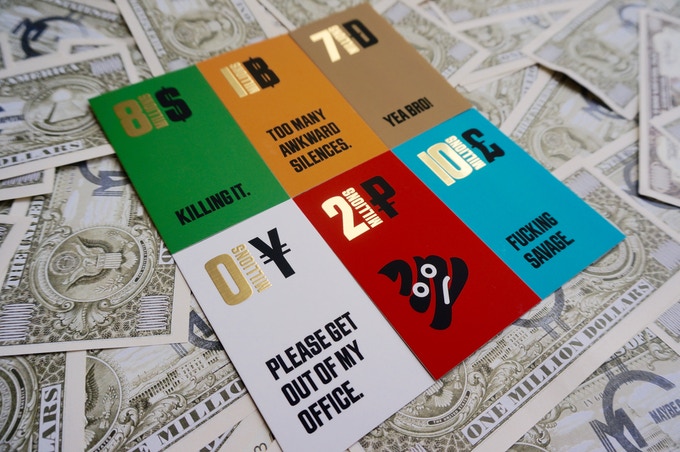 Andréa Koval spent seven years in San Francisco working in the VC and startup scene. Her frustrations with the glaring inequity between men and women when it comes to startup funding led her to launch something of a social art project/public prank.

Rick Powers is the Founder, CEO, and Managing Partner of the most powerful venture capital firm in Silicon Valley, Maybe Capital. He has gained over 1,000 LinkedIn connections this month, and receives weekly pitches from promising startups looking to raise funding. Rick is a 5-time Grammy-award-winning rap artist and a senior executive at Inc. Corp, a fortune 100 company.

He never questions himself when he puts on his power suit in the morning, and throughout the day he repeats his mantra, “Yes, I can do anything I want, and I will never fail.”

I also made him up.

While his online presence is real, Rick is a fictional character and the basis for our satirical VC firm, Maybe Capital, as well as our first product, The Maybe Capital Board Game. Because Rick spends most of his time in Cabo and and Bali, researching market disruption trends and hoping to rope in the next unicorn, we often fill in for his invites to speak at conferences and to review pitch materials from startups who don’t read through Rick’s LinkedIn profile closely enough.

It is not a coincidence that Rick Powers is a man.

Last year, TechCrunch published the average number of male and female VCs, as well as how the gender of a VC may affect the likelihood of a female-led startup receiving funding. They found that only 7 percent of partners at the top 100 venture firms are women. Did they find that it’s more likely for firms with a (relatively) high percentage/balanced ratio of female partners to fund female-lead startups?

“You’ve been outted as a female. For every pitch session, you earn 3 Million Dollars Less” – Networking Card from the game, Maybe Capital

At Maybe Capital, we designed a game that satirizes Silicon Valley.

Satirizes it to the point that you can’t not laugh, or at least giggle a little. In the game, you play an investor and board member of Maybe Capital, gathered at a board meeting to decide on which unicorn companies will be next to join the investment portfolio.

As an entitled investor, you’ll drive up and down the 101, taking meetings with billionaires, smoking pot with famous people in Marin, and eventually getting to Burning Man to host a transformational VIP hacker camp where you discover the next trillion dollar idea.

You’re also responsible for pitching new companies to each other, based on cards you’ll pick up like, “Uber for Artisanal Bread” or “Bitcoin Flavored Coconut Water” and, like a real VC, you’ll vote on these pitches with cards that say, “Killing It! 8 Million Dollars” or in an unlucky case, “Poop Emoji. Please Get Out Of My Office”.

The game is super sarcastic and unfairly rewarding of male-centric behavior. There are special cards you can pick up, like the “White Man Privilege” Card, that gets you out of all negative actions for a whole turn. The motto of Maybe Capital, The Board Game is: “The Only Game Where Nothing Is Fair”.

“The object of art is not to reproduce reality, but to create a reality of the same intensity.” Alberto Giacometti

Creating a satirical game about Silicon Valley helped my friends and me deal with the brotastic culture.

Laughter heals the world in unexpected ways and makes us feel closer to each other. In Silicon Valley, in particular, we think too much and feel too little. Maybe Capital would like to reframe the old boys’ club and build new frames to work with. It is our attempt to bring a humorous light to serious issues in a way that invites everyone to the conversation. We cannot feel fear and humor simultaneously, so the only way out is to laugh.

In the words of Rick Powers’s favorite artist,

“They always say time changes things, but you actually have to change them yourself.”  – Andy Warhol

Andréa Koval was the first “American geek,” as she puts it, hired by Cannes Lions, and she was responsible for strategizing the launch of the first technology award/mini festival, The Innovation Lions. Today, that mini festival for tech companies is one of the most important part of Cannes Lions.

She has also helped start a small company called Buzz Radar, a social data visualization startup. “Within both of these experiences, I met with VCs (all male), many of whom would assume I was the secretary of the group, and would even sometimes ignore me completely and then hit on me after the funding/strategy meetings.”

Maybe Capital raised about $15K through its Kickstarter campaign to create the board game, which can be purchased at www.maybe.capital.

“We’re now working on a web series and podcast on the same theme,” Andréa reports.