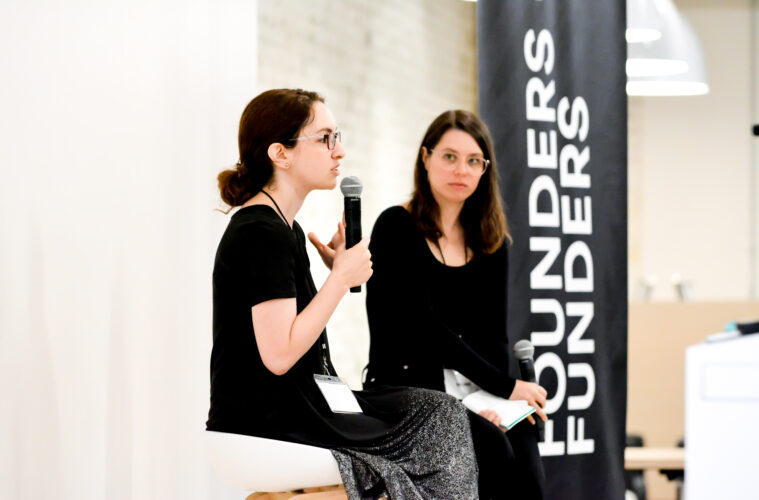 Getting to Product-Market Fit

We got to hear all about product-market fit from Sara Mauskopf, CEO of Winnie, a data-driven marketplace for parents to find trusted daycares in their area. The conversation was led by Hannah Levy of Tech Ladies.

I’m really excited to be here with Sara Mauskopf, who’s CEO and cofounder of Winnie. I’m a Winnie user. I found my daughter’s daycare and preschool on Winnie, so it’s a double honor to be interviewing her today.

Let’s get right into it. Talk a little bit about Winnie, how you came up with the idea, validated it and started growing the platform.

It’s been three and a half years. Time flies when you’re building your company.

I started Winnie with my co-founder: we both have kids, and we realized there was no platform to find family-friendly places and things to do with our kids. That’s sort of how we started, like Yelp for parents.

We had family-friendly restaurants and parks with playgrounds, and that product was something that people liked. They didn’t hate it. They weren’t like, “This sucks. I never want to find family-friendly places to go with my kids.”

But I would not say it had product-market fit. And at the time it’s hard to see that when you’re in it. You think you just have to hustle harder, to get this over the hump. You think you can growth-hack it.

That worked for a period of time, but it stops working when you get to a certain scale. What we found was that you really do need something. You need a system that grows on its own because people really want it and there’s not anything else like it, and that’s what Winnie is today. It helps parents find daycare, preschool, and more. But the daycare and preschool aspect is something that is just so sticky and so important because there’s nowhere else that you can get that information.

That was a huge turning point in the evolution of our company, when we realized that, of all the things we were doing, there was one thing that was changing people’s lives, and everything else was just kind of nice.

That’s what accelerated our growth, got us more funding, and is keeping us alive today.

Before we talk about product-market fit we go there, let’s talk about how you got to the first 100 users, and how you scaled to 1000. What were you and the team doing to acquire that first group of users as you were validating the concept?

Those users did validate that this is something that people like and don’t hate, but they don’t love, and it didn’t take off like wildfire at first.

That first set of users were friends and family. We launched our product in the app store, and we got featured by Apple, so there were a lot of users that came in through that. We king of growth-hacked our way to those users: things like getting featured, having functionalities so people could share Winnie with other parents they knew. But those things don’t build a billion-dollar business.

I would stress that it’s important pretty early on to identify whether the things you’re doing are growth-hacking you to something bigger, and to identify the thing that has product-market fit. Or are they just keeping you alive and not going to be the unicorn multi-billion dollar business one day?

That moment where the light bulb went off and you were like, “Oh, wow. This is what people actually want,” can you unpack that a little bit? What did you do to get to that moment, and then what were the next few months like after you were there?

I wish I could tell you that one day I woke up, and everyone was singing to me, “Daycare and preschool search. This is what you’re doing. That’s so important.”

What we saw was that people who had found childcare on Winnie, who had found their daycare or preschool, we had an NPS with those particular people of around 70, which is ridiculous. It’s unheard of. The iPhone has that kind of NPS. And for everything else, it was neutral to negative.

People didn’t hate it because Winnie was a free product. But it wasn’t making their lives substantially better and different. Measuring NPS for what people were actually doing with our product was really critical because it gave us the insight that when you change lives and have a high NPS, that’s the thing that has product-market fit.

After you recognized that, what were the decisions you made as a team in terms of product development or future development, and how you were prioritizing resources to lean into what you knew was working?

Then we leaned into it, and started getting comprehensive data from the state licensing database on every licensed daycare and preschool. We worked with the providers to claim and update their page and tell us when they had open spaces, starting with San Francisco, then moving on to the rest of the state of California, and then just kept adding states.

Each time, it was like we’d light up a state. You would see the users flood in. We were getting tons of traffic from Google because people search “daycare in San Francisco” and there was nothing there. It was Yelp! It was Care.com. It was these sites that have high domain authority but don’t actually have the content. They were just winning by default.

It was a huge opportunity to get this market by getting the data and having the information.

You mentioned Winnie is a free service. Can you talk about the business model and how things shifted for you when you felt like you hit product-market fit?

Having a free service definitely makes it slower to figure out if you have product-market fit, because you’re not charging people for something, so they’re not really complaining.

One of the things that happened when we started really going deep with daycare and preschool information was that we found people wanted to pay us. So we now have a membership in certain places where you can pay for early access to open spaces. That’s only available in San Francisco and New York City and certain places where it’s hard to get a spot, and you can pay for support and lightweight concierge help in your childcare search.

But more importantly, the providers were filling their open spots through Winnie. For the majority of providers, they were not online before Winnie. They are in-home providers. They’re licensed and regulated by the state, but they only got parents through word-of-mouth. When you only take six kids, if you left a space unfilled, you probably weren’t profitable. So Winnie was actually keeping them in business, and they were getting parents for free and wanted more of that.

Turns out, there’s a ton of inefficiency in the childcare market, so it’s thought to be supply-constrained. Actually, there’s a lot more supply that just isn’t being matched. When we started filling that inefficiency, people started offering to pay us. They wanted to pay to promote their daycare or preschool, and they wanted to pay us on the parent side for access to information.

That’s when we realized we had an actual business, not just a cool product.

One of the things you said was you wish you could have gone back in time and told yourself to get there faster or listen to the voice inside that said “Childcare!” Any other mistakes or regrets or places where you and your team fumbled in those early days and that you could kind of pass along as advice to the group here?

So many mistakes. I cringe at all the things we did early on to think we were successful, when we were just tricking ourselves.

But the one thing we did that was right was we kept money in the bank, and that gave us the time to get to the point where we had product-market fit. It really doesn’t happen overnight for anyone. And what’s important is that, three and a half years later, I’m still sitting down here today because we focused on having money in the bank and being able to do this in a sustainable way.

I had two kids throughout this company, so we built it in a way that we could sustain it and keep working through all these things that were happening in our lives. We knew if we worked on this problem long enough – parents need tons of help and support – there was something there that we could do to change their lives and make a difference.

The nice thing about working on a parenting start-up is that a lot of investors just didn’t want to participate. They don’t understand the problem or didn’t have empathy for the problem at hand.