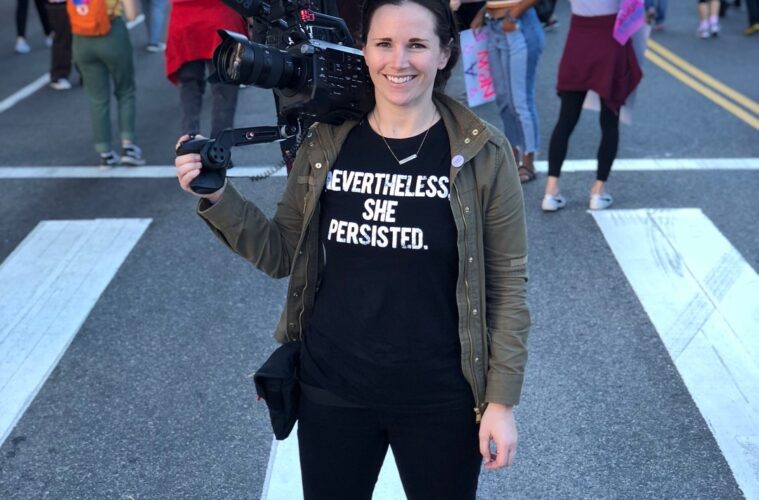 NEVERTHELESS: A Film About Sexual Harassment, Privilege and More

Taking a look behind the headlines of #MeToo and Time’s Up, NEVERTHELESS follows the intimate stories of 7 individuals who have experienced sexual harassment in the workplace or school context. From a writer’s assistant on a top TV show to a Tech CEO and 911 dispatcher, the film shines a light on the ways in which we can shift our culture and rebuild.

Some of the major themes discussed in the film are sexual harassment, gender-based violence, privilege, intersectionality, toxic masculinity, socialization of children, the legal system, the transgender experience, and much more.

The film was directed by Sarah Moshman, an Emmy-Award winning documentary filmmaker who has also produced Losing Site of Shore, a documentary about four women who set out to row across the Pacific Ocean, and The Empowerment Project: Ordinary Women Doing Extraordinary Things, a look at five women who drive across the US to film stories of strong women as they advance in their careers.

Patricia Vargo was assaulted by her supervisor one evening in 1997, while working as a 911 dispatcher. Though Patricia had spent 10 years working at the San Mateo Police Department, her co-workers did not believe her story, and she was taken to an interrogation room for questioning. After a lengthy legal battle ending at the 9th Circuit Court in California, the judge on her case ultimately determined that Patricia’s experience did not meet the legal standard for sexual harassment–a requirement mandating proof of “severe or pervasive” harassment–because it only happened one time. That same judge who handed down the ruling in 2001 stepped down in 2017, after receiving sexual harassment allegations against him. He retired with a full pension. On January 1, 2019, due in part to the precedence that Patricia’s case set, California’s legislature passed SB 1300: a statute that further clarified the “severe or pervasive” legal standard for sexual harassment and may make it easier for people like Patricia to now win their cases.

Amaani Lyle was fired from the writing staff on a hit 90’s television show after complaining about the hostile work environment she experienced there. Although Amaani wasn’t harassed personally, she was impacted by vulgar, offensive and objectifying language used by the showrunners and writers on the show; her case is still used in law schools across the country as an example of a “hostile work environment” and the tension between the right to free speech and a worker’s right to a non-hostile workplace. The court in Amaani’s case ultimately ruled that “creative necessity” protected the vulgar language to which she was exposed, and Amaani had to find a new career.

Cheryl Y. Sew Hoy was harassed by a powerful and well-known venture capitalist in Silicon Valley one night at an after-work event. Horrified but relieved she was able to escape his advances, Cheryl waited a few years to speak up about her experience, knowing well that she could lose her credibility and power in Silicon Valley if she told her story. Once other women started coming forward, Cheryl went public about her own story of harassment. In the aftermath, her assailant issued her an apology; Cheryl now fights to create change for other entrepreneurs through her initiative, #MovingForward.

Tonay Exum is an Iraq War veteran, a rape survivor and a mother of two. Tonya’s harassment from co-workers and supervisors at a major auto company began on her first day on the job more than seven years ago and has persisted for her entire employment. Despite her continued attempts to report the harassment and assault she experiences daily, the behavior continues, and Tonya lives in a state of fear and paranoia. She is fighting against a decades-long toxic workplace culture but is determined to make lasting change for herself and other women.

Marie Angel Hernandez escaped Honduras when she was a teenager, coming to the United States in search of a better life and the freedom to come out as a transgender woman. When she got to Texas, however, Marie’s restaurant manager would not allow her to present as a female, insisting that if she wanted to keep her job she would have to present as a male. With limited options for income and stability, Marie stayed, hiding her gender identity. Marie now fights for trans workers’ rights.

Heath Phillips joined the Navy at 17 with his whole life ahead of him, excited and honored to serve. It wasn’t more than a few hours in to his service that he was sexually assaulted by a group of six men. The group repeatedly raped, bullied and harassed him for what became the worst year of his life. Heath’s reports of the abuse went unanswered by his commanding officers, who did not believe his repeated accounts of assault. Desperate to escape, Heath eventually went AWOL, and within one year, was dishonorably discharged and sent back home to New York without veterans benefits. After 20 years without breaking his silence, Heath now works as an advocate for other survivors of rape and assault. Almost 30 years to the day after being dishonorably discharged, Heath was awarded an honorable discharge and an apology from the Navy confirming that his experiences were valid and real.

Mother and daughter Juliet and Lilly Bond fought a sexist dress code at their Midwest middle school–and won. When Lilly came home from seventh grade having been “dress coded” for wearing leggings to school, her mom was curious. Upon further inquiry, Juliet Bond discovered that girls were banned from wearing yoga pants or leggings to school because it was “too distracting for the boys.” Juliet wrote a letter to her daughter’s principal calling out the gender bias–and rape culture–at the heart of the policy, and when a friend shared it on social media and a local journalist covered the story on her blog, the story went viral. After student protests and testimony at school board meetings, the district changed its policy.