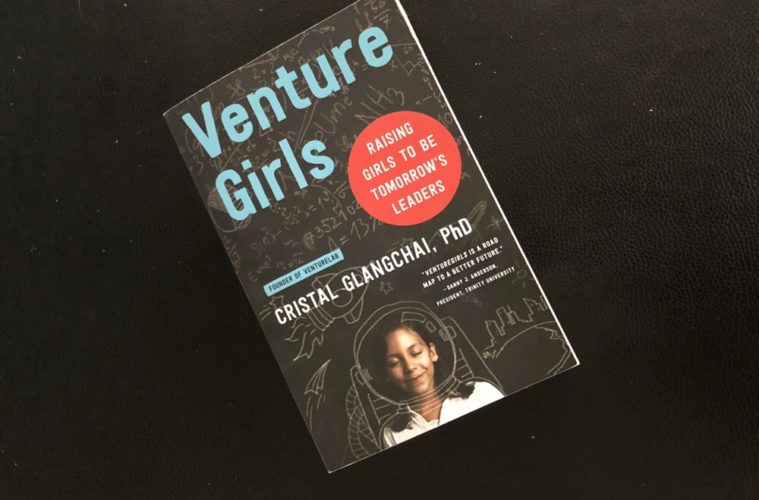 Cristal Glangchai Believes Girls Have the Power to Change the World. And She Can Prove It.

Cristal Glangchai, PhD, is a scientist, entrepreneur (she founded a drug delivery company that developed disease-responsive nanoparticles to target tumor tissues), was the director of the Blackstone Launchpad for entrepreneurs at the University of Texas, pioneered the 3 Day Startup San Antonio program, founded VentureLab, and is the best-selling author of VentureGirls: Raising Girls to be Tomorrow’s Leaders.

So how did she become a tech entrepreneurial powerhouse – and why does she believe an entire generation of girls can easily eclipse her accomplishments?

It Starts at Home

Several studies reveal that girls tend to lose interest in STEM by the time they reach middle school. How did Glangchai avoid becoming a statistic? The oldest of three girls, she grew up in Austin, TX. Her mother was a librarian and her father, who grew up in Mexico and immigrated to the US to attend college, was a teacher and coach. “He instilled in me an immigrant mindset, or what I call an entrepreneurial mindset,” she explains. “He always told my sisters and me that we could do and be whatever we wanted if we were persistent, worked hard, and followed our passion.”

Glangchai says her father always wanted boys, but since he had girls, he raised them like boys. “We played on the boys’ soccer team and my dad taught us everything from electrical wiring to tiling floors to changing brake pads in the car – and we loved it.”

Both of her parents created an environment that fostered curiosity and experimentation, and encouraged the girls in math, science, and engineering. “For Christmas, we would get science kits, and if we wanted a dollhouse, our dad helped us build it instead of buying one,” Glangchai says. “It really was a hands-on childhood and I enjoyed the thrill of building and discovering how things worked.”

As a result, Glangchai was in the engineering club when she was in junior high school. She didn’t mind that there weren’t other girls in the club and wasn’t concerned that she didn’t fit neatly into the notion of what girls should be doing. “It was something I was passionate about, and because of my upbringing, I never saw the difference between boys and girls, and was confident that I could master anything I put my mind to.”

However, Glangchai doesn’t want to be an exception to the rule. Her goal is to increase the number of girls who pursue careers in STEM fields. “We live in a world that is shaped by scientific technologies – in the last century alone, we’ve had unprecedented innovations, giving us the ability to easily travel and communicate across the globe, to get goods and services delivered almost instantly on demand, and to enjoy fingertip access to the knowledge of all humankind.”

From advances in agriculture that have reduced the number of people living in poverty, to medical advances that have improved the quality of health for millions – and even extended their lifespans – she says STEM-based innovations make it clear that these skill sets will be necessary for not just technical professions, but all professions.

“However, even as STEM is playing an increasing role, women continue to be underrepresented in STEM professions and each year, millions of girls who are vital to our nation’s future abandon their dreams,” Glangchai says. “The social forces that discourage girls from pursuing their full potential begin to affect them before kindergarten, become cruel in middle school, and erode their confidence further as they mature.”

And at the same time that technology careers increase at a rapid rate, the gender gaps will also increase. Some industries already struggle to attract women, and jobs in those sectors are projected to increase. “Also, other jobs traditionally held by women may become obsolete,” she warns.

​It’s vitally important to increase the number of girls in STEM to create a pipeline of more women in STEM, since the jobs in demand – and also those that pay well – will require STEM-based knowledge and skills. According to the U.S. Bureau of Labor Statistics, 80% of future jobs will require employees to have technical skills, and 93% of STEM jobs pay more than the national average. But there’s yet another reason why STEM has to be relevant to girls.

“​It’s critical for our girls and for our future as a society to fold girls into the STEM fields,” Glangchai says. “We need to create a world where both men and women are engaged in and building the future.”

There’s also a lack of encouragement and role models. “Girls are set on a particular, narrow track when they’re given Barbie dolls and quietly discouraged from playing with Lego blocks,” Glangchai says. When parents who may not themselves be comfortable with STEM say “We’re not just science people,” or teachers say, “Maybe that math class isn’t for you,” Glangchai says these types of statements warn girls away from STEM.

“Furthermore, in media, only 12% of STEM characters are female – girls are watching these movies and TV shows and don’t see themselves in these careers.” But what girls do see in media (and social media) are images regarding how they should look and act – leading to perfectionism. As a result, girls are less likely to get out of their comfort zone – and challenge the media images shown them – to try something different. “The funneling of girls away from STEM can be subtle and unintentional, but has a profound effect on girls.”

Glangchai wrote VentureGirls: Raising Girls to be Tomorrow’s Leaders, to bring attention to the problem of a lack of girls in STEM and provide solutions for raising and encouraging girls to be daring and develop an entrepreneurial spirit.

She also created VentureLab, an organization helping to create the next generation of innovators and change-makers through entrepreneurial learning. “Entrepreneurship isn’t just about starting companies — it is a skill-set and a way of thinking,” Glangchai explains. “It involves identifying needs, brainstorming creative solutions, taking calculated risks, learning from failure, and persevering despite setbacks – in short, it’s about having a vision and making it a reality.”

While she believes that all kids should reap the benefits of entrepreneurial learning, the program takes into account that girls are often dissuaded from this path. “We’ve designed our programs around best practices for helping girls grow a visionary, innovative, resourceful, and persistent mindset and ‘heartset’ that they already possess.”

At VentureLab, entrepreneurship brings STEM to life. “It allows girls to see how STEM subjects are needed to solve problems around them and help others,” Glanchai says. “It makes STEM relevant and real and gives girls – and all kids – the confidence that they can turn their ideas into reality.”

In the future, the majority of jobs will require technical skills – and the majority of STEM jobs will pay wages that are higher than the national average. From a purely economic standpoint, it makes sense to engage girls in STEM so they will be able to fill these jobs.

But the stakes are even higher. We need women integrated in STEM to help shape product design and use. For example, during this year’s Consumer Electronics Show in Las Vegas, one product, which was unveiled at a Vegas strip club, was a pole dancing stripper robot. It’s hard to believe that equal representation in technology would have resulted in the promotion of pole dancing animatronics as noteworthy. As more women enter STEM fields, their representation will affect research priorities, products and applications, policies – and hopefully, leadership.