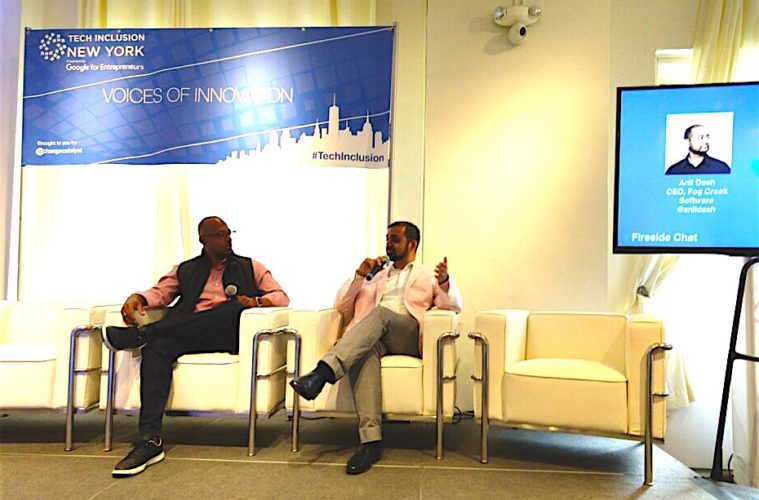 Anil Dash Talks Culture in Tech, and What Could Make D&I Move Forward

The theme this year was “Voices of Innovation” – featuring diverse, underrepresented voices building the innovative technologies and cultures of our future.

AD: There could have been more regulation, and more thoughtful policy and engagement with the internet. There’s a lot of shared responsibility with what’s gone wrong.

You design technology with good intentions – research facilities, social impact etc – and the tools were originally built for the problems they were solving. For instance, when email was created, the recipient didn’t have any verification about where the was coming from, you knew it. That’s my name. You didn’t question is. Then you add a billion more people come into the system, and you have spam. And you say, “Oh, that original solution wasn’t designed for now“. When you don’t build in for growth, you see the limitations and sometimes negative impacts of technology.

So technologies were scaled to millions and millions of people more quickly than the tech could keep up. You could relate this to the limitations of the minds that built them. Activists should have been involved, artists, etc. There were people waving red flags, they weren’t listened to.

WS: I have this hypothetical theory that if the founders of some of the major tech companies were founded by more underrepresented people, we wouldn’t have these problems.

AD: Around 2000, 2001, a company I was working for was making early blogging tools, used by HuffPO and a few other big names. The CEO was a woman, she was young, 23, a Latina. She was a visionary, and imagined a world where people would be sharing photos with family, on their phone… before any of this actually happened.

Then investors came in, and said “You worry about that [vision], and we’re going to get a new CEO.” That CEO was a man, and they pushed her out quickly. Almost all of these similar companies back then had women founders, and they all got pushed out. The gender numbers were much better then than they are now.

When that happens once, it might be a  coincidence, when it happens 10 times, it’s not.

WS: You’re now CEO of Glitch, how did that happen?

AD: Some part of it is the Old Boy’s Club, let’s be honest. I’m CEO of Fog Creek Software, the parent organization to Glitch and several smaller technologies. We’ve never taken VC money, we’re a small team, about 30. It’s going really well, but as a company, what we are is the last of one of the independent great tech companies. We’re not trying to beat Google, or raise money. We’re old school, trying to sell products, exchange them for money, and pay our people well. That’s wild that it’s radical, but not a lot of companies do that any more.

WS: It’s not horrible to be bought by Google.

AD: No, it’s not. But it’s not the only path. There has to be this range of stuff. Katrina Fake calls us a “middle class” tech company. We and others like us are threatened like middle class society.

WS: There’s nothing wrong with being “middle class”. You’re also one of the most outspoken tech CEOs out there. Why aren’t others doing that?

AD: That’s how I was raised. There’s this thing now, like “woke” CEOs now. <laugh> More CEOs are starting to speak out, but it’s taken an extreme moment, and that’s a shame.

My family is from India, from one of the poorest parts of India, my father was born a British subject, not a free man, as I would define it. These were the stories I was raised on, that tradition. Now, I get to live here in NYC, and raise a child, and I have access and support. My parents didn’t have anything close to this, not even electricity. My dad came here, got a Phd, and set me up to the point where I got to go to the White House and advise Obama.

That happened in a single generation. That’s the ideal American Dream. But a lot of obligation comes with that. I have to give it back. I have to use my voice.

WS: Let’s talk a little about diversity and inclusion.

WS: We’re in year five of what I call the second wave of D&I. The first wave people don’t talk about. There were a lot of D&I officers at some of the big companies. Google released their numbers in 2014, now more are. Now we have a bunch of D&I leaders, the numbers have improved, but not a lot. What do you think should change? Why hasn’t it moved forward?

AD: It hasn’t moved forward because there hasn’t been a cost. There is no lunch counter or boycott. No way to say, “I’m not buying this product.”

I can not use Google, but it still has a file on me, I’m in their database, and I can’t opt out. There’s no way for me to put financial penalties on companies.

Apple is really thoughtful about this. You’re probably opt in with most of what Apple does. That’s much more consent based. I think Microsoft is headed in that direction. But ad-based platforms have tended towards gathering all the data, which means it’s impossible to meaningfully consent to those platforms. We can’t be informed consumers.

That breaks our assumptions about regulation policy and law. We assume that we can take action, and that one of the actions is that we do not have to be a patron of that company. Consumer regulation is based on the fact that you have consent. We haven’t evolved.

And how many members of congress know how to install an app on their phone. Like 5, maybe 6? And they’re building policy. They’re flaunting their illiteracy in tech.

A boycott doesn’t work, we can’t opt out, so where is there a cost? This is where inclusion can make a difference. They’re spending  a ton of money on talent, if that’s going to cost them more, they’ll listen.

WS: So, we tell tech companies that they’re not going to be able to find talent, they’re going to put more resources into talent.

WS: What’s interesting, is people are going into Uber for a year, to get the tech stamp, then leaving.

WS: Let’s talk about the Obama Administration. You were an advisor to the Obama White House’s Office of Digital Strategy. What was great about that?

AD: We had a super diverse team. They were very earnestly engaged – this seems like a while ago – in how the public could give feedback. What’s the best use of these platforms? They were even mindful that they could be used for manipulation.

One of the things that stood out to me was the sincerity and clarity of the work they did, and that they felt they could make an impact. There were times I would push back in disagreement, and they would be able to have a great conversation, and they were fluent in the technology argument. Know your shit. It’s so important to know this stuff cold, forwards and backwards.

WS: Thoughts on how the current admin is working with or not with the tech industry?

AD: It’s complicated. There are 1000s of people who work there, under really hard circumstances. They’re using all the tech and platforms the best they can. I look at Peter Thiel on the board of Facebook while he’s independently trying to kill media. I’m old fashioned, but I think that’s bad.

Using technology for manipulation is horrible. We will all be judged by our role in that.

WS: We’re both early adopters of twitter – 2006. We’ve seen it evolve. They just rolled authentication yesterday. You wrote an article a few years ago about twitter dying. If you were the CEO, what three things would you do?

AD: <laugh> There are a lot of things.

Reframe the discussion around free speech. Free speech is when people who are marginalized are able to speak without being harassed or tormented or their lives at stake. They’re inching towards that. That’s step one though.

I’m going to be a geek. There’s a lot of platform stuff they missed. I use twitter for DMs. Twitter should’ve been WhatsApp. You can’t do anything in there, it’s like 1924. Let developers create stuff again.