We Won The BeMyApp Hackathon – Vote For "PlayPitch" Today In The App Olympics!

I participated in a hackathon.

This time it was the BeMyApp Mobile App Olympics.

I have always wanted to build something with server push technology, so I thought it will be great to do it at a hackathon.

I signed up as a Developer without thinking, since that’s who I am. But when I arrived on Friday night, I was told that I could not work on my idea, because I did not sign up as an Idea Generator. I was so disappointed that I told myself I would just go home after listening to the other pitches.

Around 30 people came up and pitched their app ideas. Afterwards, the Developers and Designers vote for their favorites by giving the Idea Generator their poker chips. The top 5 ideas would be developed during the hackathon.

One of the finalists was my friend Judy Tuan, who proposed a music learning app for the iPad.

I actually liked the idea quite a bit, so I asked Judy if I could join her team, even if I had no iOS programming experience.

She enthusiastically said, “Of course!”

We came back Saturday morning, ready to build our app.

The working name was PlayPitch, and we liked it.

“P” is a nice letter since we could make it look like a note.

We also came up with a mascot: the lion conductor. He was christened “Gustav Mauler“.

There were quite a few developers, and we quickly divided into sub-teams:

We all learned it on the job, and were making rapid progress.

By the end of Saturday night we had basic pitch detection going, and the UI reacted to good and bad notes as mocked with buttons.

We gave a quick demo to show everyone our progress:

By 5pm we had a very nice demo going:

Final presentation started at 7pm. We gave a live demo with the pan flute and the keyboard, and the audience loved it. 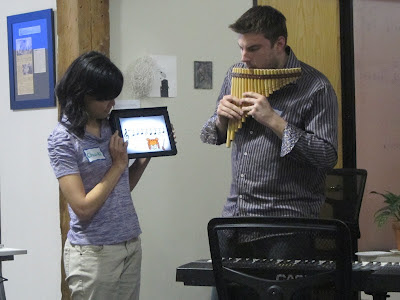 One of the judges, Ben Parr, got so excited that he came up to try the keyboard. 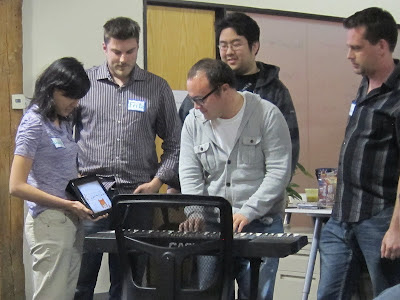 The technology is super cool, but we also have an awesome business model to go with it.

BeMyApp paired each team up with a mentor, and ours, Ivan Dwyer, works with Alfred Music Publishing to bring sheet music to the iPad. They already have an app that displays sheet music as PDF, and would be the perfect partner for PlayPitch.

PlayPitch would be a freemium app. The base app is free, with a few free songs. Users can buy more music with in-app purchase. Sounds familiar? Monkey Write is freemium as well. In fact there are a lot of parallels between PlayPitch and Monkey Write:

After all four teams presented, the judges deliberated for a long while, and finally announced the winner.

We would be competing against winners from BeMyApp Dallas, New York, Berlin, London and Paris. Please vote for us!

About the guest blogger: Chiu-Ki Chan worked at Google as a software engineer for over six years, and spent a year and a half at two startups. She went independent last year with her own Android development company. The first title is Monkey Write, an app for learning Chinese writing. Follow her on Twitter at @chiuki.