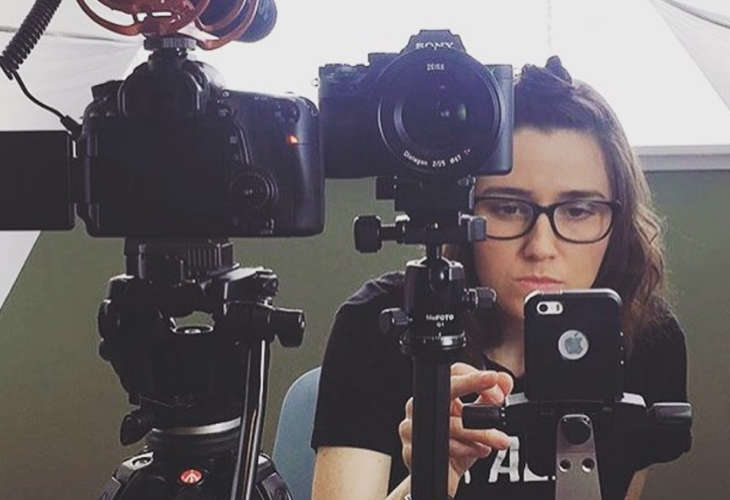 We sat down with the makers of Sheleader, Mary Betsy and Myles Pratt, to get the scoop on this fun, informative series of video profiles of women who have founded companies or nonprofits.

We’ve watched a few episodes of Sheleader and loved it. How do you describe your show?

As an online video series featuring interviews with pioneering female founders, particularly those in the tech industry. Each episode I visit a different entrepreneur to ask burning questions about business, while live-streaming the interviews so others can join in. The final shows are edited into fast-paced vlogs, with the Q&A portion sandwiched between my own commentary.

How did you get the idea?

When I was searching YouTube for business advice because my husband and I run a video-production company, Forward Films.

First, I found myself frustrated by the sameness I would encounter in the results. Playlist after playlist showcasing the “world’s most successful entrepreneurs” would queue up all white guys — not that there’s anything wrong with white dudes, but I thought: The internet’s understanding of top entrepreneurs should look way more diverse. YouTube is the second-largest search engine owned by (and increasingly integrated into) the first-largest, Google. Not to mention, its videos win the attention of young people across the globe, so I knew that YouTube was a critical arena to create social change. Second, I saw that much of the most valuable business content on YouTube was not being delivered in a YouTube-friendly format. A lecture on startups would be captured because someone propped a camera up in a classroom or convention hall — which is an amazing way to scale education on its own — but the video’s production often seemed like an accessory to a live event. The content was not being created from the start for the YouTube audience.

YouTube, as the name implies, was born from individuals sharing their lives, which is why the most popular channels have showcased personal narratives over many years. I saw an opportunity to offer business-education content in a format native to YouTube. I invited experts to speak straight into the camera lens, tried to encourage engagement with the online audience through live-streaming and viewer questions, and wove my own journey through each episode as a connecting thread.

So, you really kept the YouTube formula-for-success in mind at many stages of the planning and making. But how do you select each Sheleader?

Initially, we tried to pick interviewees that fit a narrower niche within tech, but ultimately I went with my gut and chose ladies I found most interesting. I’m drawn to women who are making movements through their work and whose presence I sensed would shine on video. The #Sheleader setup captured by ?@sarahderagon right before her live interview.

How did you produce this?

Mostly with adrenaline. It was just my partner Myles and I who made the first season (as you can see in the show). We gave ourselves about a month to record eight episodes using the gear we already own and a chunk of our savings. I say this as a disclaimer more than anything because we make videos for a living, and when clients hire us, we use a more complex equipment setup and the bar for technical quality is much higher. Letting go of that perfectionism to produce this pilot season has felt extremely vulnerable to say the least, but we knew we needed fast feedback on the content and format before we could dream of securing other resources.

What did you learn through producing the series?

I think someone important once said that we give the world what we most need ourselves. Especially after this first season, I learned that I created the Sheleader show for myself as much as for anyone else.

As entrepreneurs, we often climb mountains and fight fires in solitude, trying to figure out too much inside our own heads. We need to find mentorship and community with kindred risk-takers to feel sane and push forward. I just decided to do that publicly because I figured others must have the same questions and fears that I do. This little video series has let me come face to face with women who inspire me, but also slightly intimidate me because they’re tackling challenges I’ve been tip-toeing around like a wuss, such as growing a team at Forward Films. Being able to learn from these founders in person and scale that knowledge through my own craft has been empowering in the warmest, fuzziest way. Plus, sharing my aspirations (and the fears surrounding them) on camera adds a special layer of accountability.

My partner and I are not gunning for a second season just yet. Right now we’re just excited to share the first eight episodes and hear what resonates.

Making this show has felt like an intense period of study for us, and we’re left emboldened to ramp up our little video agency more than ever, so that’s what we’re focused on.