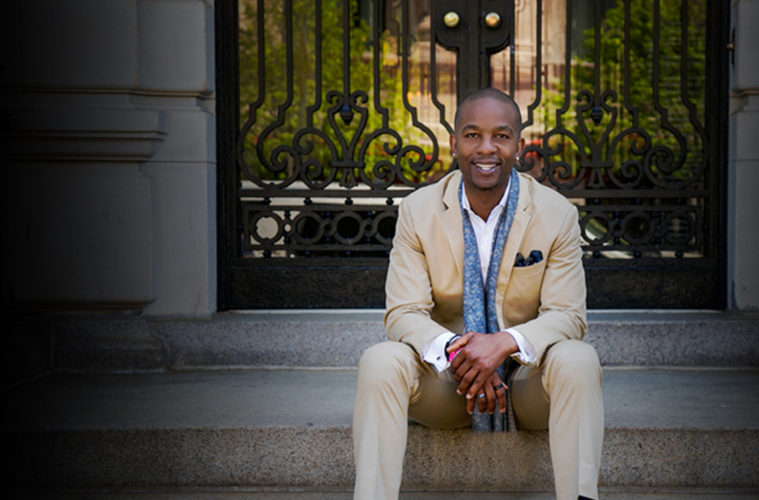 Wade Davis Has Tough Talk for Men in Tech

Former NFL player Wade Davis is now making his living writing and speaking on social justice issues, particularly the issues of misogyny (patriarchy), feminism, and homophobia. He is a feminist and thinks that more men need to embrace feminism and divest in patriarchal systems.

Women 2.0 spoke with him this week as he drove back from a speaking engagement in Philly to a meeting in NYC around men and gender equality. Davis is also on the Women 2.0 Allies Committee.

How can you tell if a man is a feminist?

It’s pretty easy to tell just because the type of conversations I’m really enlivened by and the types of conversations I have with my friends are political (everything is political). So, whether we’re talking about music or culture or politics, at some point in the conversation it’s going to go to a space where someone is going to offer commentary that will reflect their politics when it comes to gender equality. And that’s the opportunity for me to not see myself as any better than them, but to be much more inquisitive about some of their ideas about women, equality, and equity.

But again, I try my hardest not to be judgmental, but to be open and ask more questions.

What about men who aren’t as into reading scholarly books as you are? How do you address gender equality with people who are not intellectuals?

First, we all, including myself, must try to not elevate certain people, like those who call themselves intellectuals as the only people who are wrestling with ideas like gender equality. I would never call myself an intellectual. I’m someone who is reading, writing, listening and learning how to show up as a better and more whole human being.  And I think most of us are.

The men who aren’t reading scholarly books still have opinions and thoughts that are valid and need to be respected, and we all must be accountable for our words and actions and how we oppress or create space for others to have access to life.

And we all have opportunities in our lives to start to engage people in these types of conversations. How do we all remain curious?

And even though I do read a lot of books, I’d say where I get most of my learning from is following women like your CEO [Kate Brodock] on Twitter and on Facebook and just reading what they’re posting about. Not articles that they’ve read, but just what is happening in their daily lives.

The way women experience the world is so drastically different than the way I do. Whether it’s my friend Brittney Cooper or Imani Perry, I really try to be invested in their experiences. And then I can talk about that with my friends. I can ask, “When is the last time you’ve gotten off the subway and really been afraid?”

Women in tech are outnumbered. There’s a lot of inequity. How can men in tech be better allies?

I’m going to say something a little rude, but most of the men in those spaces [tech industry] would identify as progressive and liberal. And if the men want to be real allies, they need to be first honest about their own shit. Men must own our shit—that we are heavily invested in creating and maintaining patriarchal systems.

The tech industry is no different. Whether it’s me or Tim Cook, we have to own that we are part of the system. Yes, patriarchy has benefited us like crazy, but it’s killing us at the same time. If we can own that, we can really become allies.

I have to do a lot more work than just saying that I support women in the tech space. It would be hard to find a guy in San Francisco who wouldn’t say that women should be better represented in the tech industry, but still we’re in this spot.

The tech space honestly… I’m much more afraid of the liberals in the tech space than I am of the people who voted for Donald Trump. The people who voted for Trump will stand by their convictions. Those in the tech space claim to be progressive, yet under these liberal folks they created an entire industry that is void of women, folks of color, different abled people, etc.  Yet they will not own, at bottom, what really drove their decisions and why the industry looks the way it does.  They know.

And until they own it, nothing will change because they aren’t being honest with themselves. Until you’re honest with yourself, you can’t be honest with anyone else. And nothing REALLY changes.

Are men going to suffer or lose something when women gain equity?

If we truly believe in a fair and just world, we all have to give up something. We’ve been having this conversation for too long.  Men will lose something, yes, but what we will gain, what everyone will gain, is so SO much more than we can even imagine.  But that’s the risk we’ll have to take. The only way out is to go through.

One thing we hear a lot is that men are more confident and bold. That this might be part of their higher rate of success. Some people point to the idea that women need to act more like men.

It’s total bullshit. It’s almost like “If we can fix the women to be more like men…” then everything will work out. The patriarchy is a system, and we must name is that, has always been broken.

The idea is to allow people to attempt to bring their authentic selves to work. We want women to bring their point of view, not blend in or assimilate to the current structure, but [rather] to remake the current structure. If you changed women to become more like men, then you haven’t actually changed the structure and the work won’t be as good. The work can be so much grander and more innovative and creative, when we have real diversity and inclusion.

Please check out more on Wade and our Men as Allies Committee.