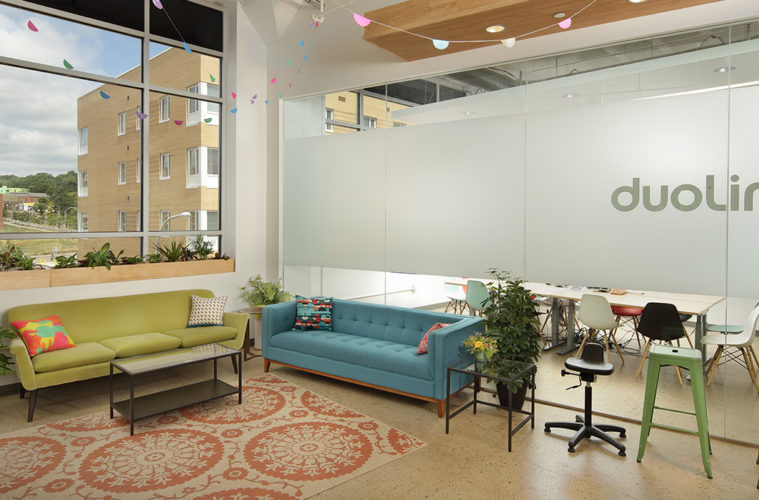 Duolingo is a steadily growing, well-funded startup company with 80 employees in a colorful Pittsburgh office that features the obligatory ping pong tables, hammocks, and mod diner booths for employee collaboration. (Its office was recently named one of the city’s “Coolest” by the Pittsburgh Business Times.)

The company’s main product is an app that teaches you a foreign language by reminding you to spend time daily playing its language-learning practice exercises, which consist of taking little quizzes on your phone or computer. It was the brainchild of a Carnegie Mellon computer science professor and one of his students.

The app was Apple’s choice for Best of the Year in 2013 and has topped most lists for best language app since then. The mission is to “make education free and accessible to all.” Lessons are free and will always remain free. It has over 120 million users.

“Culture, society tells girls at a very young age that we should have certain kinds of careers, certain kinds of personalities. It starts from there,” says Sohn. Only 18% of graduates with a bachelor’s in computer science are women. How does she tackle it?

“Companies have two choices,” Sohn says. “They can say, ‘We are not diverse, so we need to hire.’ Or, they can say, ‘We need to become diverse ourselves.’ I’m definitely in the second mindset,” Sohn explains. “We want to create a community of people who believe in diversity, not because it’s good PR or makes them look good, but because it can make you better. Diverse companies perform better.”

The Women of Duolingo

Sohn’s first diversity initiative, back in October of 2016, was to start a social club for the two dozen women who work at the company. They met quarterly, offsite. “It’s really important that it’s offsite. I send out a question in advance. We get together over dinner or tea. Everyone gives their two cents. It’s just a positive affinity group where everyone supports each other.”

At the most recent meeting, the women voted to invite men to the gathering every other quarter.

At another meeting, the women made posters and everyone wrote down one positive thing about that person on her poster. Sohn says the affirmation posters are a great thing to hang in your office and to look at if you ever feel down or discouraged.

A Diversity Committee and Workshops

A second prong of Sohn’s strategy to build support for diversity at the company is a diversity committee, which is open to anyone, from intern to full-time employees. New people have joined every month since its inception and the committee is now 12 people strong. They meet monthly and develop diversity exercises for use at company-wide meetings.

The addition of diversity and inclusion workshops enhances the process. “Six months ago, we had our first inclusion workshop,” Sohn says proudly. “It wasn’t mandatory, but I can only think of two people who didn’t show up.” (Oops!)

The workshop’s theme was “What Does Diversity and Inclusion Mean?” Sohn, along with colleagues including Duolingo’s head of HR, Christine Raetsch, designed the curriculum.

How to Get Hired at Duolingo

“Have a real passion for language learning. Really believing in the company’s mission and really wanting to join the team goes a long way in getting you hired there,” says Sohn, who continues to be amazed by how many applicants don’t seem to care enough about the product—the language lessons—to have become deeply familiar with it before their first interview.

Sohn’s favorite thing about the company is her coworkers. “The people are so incredibly talented, selfless. We love hanging out with each other.” There are two company-wide meetings every week—one on Monday and another on Friday. “That’s super rare,” Sohn says. The meetings make the team tighter and give everyone a chance to hear what everybody else is working on.

When asked what kind of jobs she’s hiring for, she says: “We’re first and foremost a tech company. We’re hiring software engineers. Management, research. On top of that, product managers, great designers.”