The Gender Gap in Game Design is Gradually Closing

Insight from a game designer on where the space is going in terms of the gender divide.

52% of today’s gamers are women, according to recent research revealed by the Internet Advertising Bureau. After years of being seen as a male-dominated business, the proportion of women working in game design is now on the rise.

Four years ago, the Boston Globe published an article entitled ‘Women Remain Outsiders in Video Game Industry’. It gave a catalogue of horror stories that made the board rooms of the gaming industry sound more like a boys’ locker room.

How times have changed since 2013! Today there are still more men than women working in the gaming industry, but the proportion of women has risen exponentially, and the frat boy mentality appears to be consigned to history.

There really is no better time for women to embark on a career in game design. Think you’ve got what it takes?

Do you love gaming?

There are a number of skills that will put you in good stead for a career as a game designer, but the most important prerequisite is a real enthusiasm for gaming. Are you intrigued by the way in which the gameplay itself combines with the story it tells and the artwork and settings that form the backdrop? And can you identify what sets a really great gaming experience apart from an average one? If so, you have a head start that cannot be learnt, and is a natural aptitude for the art of game design.

However, not every enthusiastic gamer makes a great designer. You also need to be a team player who is willing to put in hours of hard work. In addition, you will need a thick skin. The “locker room” mentality might be a thing of the past, but it is still a fact that there are more men than women in senior roles right now, and if you cannot take constructive criticism well, this might not be the career for you!

Most of today’s designers began their careers as testers, as this gives a great grounding in all aspects of design. It might also be useful to pick up some appropriate qualifications. There are many courses out there, ranging from general computer sciences to specialist qualifications in game design.

It always makes sense to keep your options as wide open as possible, so avoid specializing too much, too soon or you might paint yourself into a corner.

The truth is that women are still earning less than men in the gaming industry, but this is largely due to the fact that the senior roles are still male-dominated. With the increase in women coming up through the ranks, it is reasonable to assume it will balance out soon.

Pay scales vary throughout the industry and by location, but starting salaries as a designer average around the $45,000 mark, while the best companies pay their top designers around $130,000.

Now working as a freelance writer, Jackie started her career in software development and spent some time teaching IT in schools too. Taking a step back to start a family a few years ago made her reconsider what was important and now she spends her time writing, looking after her two daughters and walking a naughty labrador puppy called Bertie. The Gender Gap in Game Design is Gradually Closing

Insight from a game designer on where the space is going in terms of the gender divide. Let’s Get Chemical: How to Gamify Behavior and Influence

Leading neuroscientist Andrea Kuszewski explains why unlocking the hearts (and minds) of your users isn’t just an art – it’s a science.

Sustaining Users, Sustaining Revenue: Staying Ahead of the Game

Sustainability in any industry is key, but especially in the gaming world where the “next big thing” is just around the corner. Anita Sarkeesian’s Tropes vs. Women: a Critique of Female Stereotypes in Video Games

A female gamer faces a terrible backlash when she decides to examine the ways women are portrayed in video games. All my life I was a “doer”. Arranged, promoted, organized, friends, family, work, I never sat and looked from the side, or waited for something to happen.

I always looked at myself as a resourceful girl. I didn’t know what it meant to be an entrepreneur or what you needed to do to become one. In my case, becoming an entrepreneur wasn’t something that I chose, it chose me! People always say luck is being in the right place at the right time. I guess this happened to me when I was introduced to a friend of a friend who had some big ideas, but needed Women 2.0 Save 20% on Tickets to Mega Startup Weekend (September 9-11 in Mountain View) 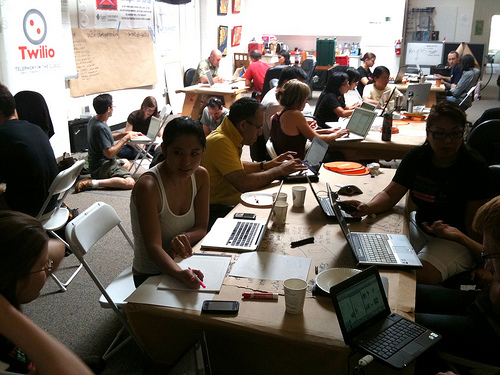 The Internet is full of articles describing, lamenting, and diagnosing the fact that there aren’t enough women in tech. And it’s true — women are under-represented in technology and as entrepreneurs.

But talking about the problem doesn’t do a whole lot to change the situation. If women want to be better represented in the worlds of technology and entrepreneurship, we have to act.

I’ve seen firsthand, again and again, the power of doing over discussing. At Startup Weekend, we’ve taken the motto of “No Talk. All Action.” to heart. Entrepreneurs know that to build companies