Already suspecting some of your resolutions may be doomed? That doesn’t mean they were useless.
By Janet Choi (Chief Creative Officer, iDoneThis)

Maybe people have wised up to the fact that most resolutions don’t succeed or think there’s a better way to embark on habit changes and goals than this annual tradition.

Timing Can Unlock Your Motivation

It turns out that timing is more important than you think in changing your habits.

One of the greatest struggles to overcome when trying to change your ways is the very first one — the act of getting started. It’s easy to announce your grand intentions and resolutions, and it’s also easy to put them off. Those first few steps breaking away from your everyday inertia, on the other hand, are hard. Whether it’s summoning the strength to finally get to the gym or prevailing over the paralyzing blank page to create those first imperfect sentences, beginning is a battle.

That spark of motivation you might feel as the calendar flips from December to January can be enough to bypass that battle and get you started. Our motivation to act doesn’t float around, available like air. Instead, it waxes and wanes so that there are moments that are more actionable than others.

Researchers from the Wharton School at University of Pennsylvania, Hengchen Dai, Katherine Milkman, and Jason Riis, confirmed that the timing of resolutions plays an important role in motivation and overcoming procrastination on your goals. They observed a phenomenon they called the “fresh start effect”. Time-based turning points provided a real nudge to start behavior change. This includes junctures such as the beginning of weeks, months, and years and also certain landmarks such as birthdays, holidays, or job changes.

For example, in one study, the researchers found that Google searches for the word “diet” peaked at the beginning of the week, month, and year, as well as right after federal holidays. In another, they found that undergraduate students were most likely to visit the gym at natural turning points such as a new week, month, year, and semester as well as right after birthdays (excluding 21st birthdays — conclude what you will).

They explain that these “temporal landmarks open new mental accounts”, a new mental page that is readier for achieving goals. So even though the desired behavior declines, timing can serve as an important ingredient in the recipe for successful change. A new year, then, is the perfect time to make a resolution because your motivation is higher.

At the same time, if you fail at your New Year’s resolution or didn’t make one, you can take advantage of the many “fresh-start opportunities throughout the year” to start anew or try again with a renewed morale.

We often don’t stop to take stock of how far we’ve come or focus too much on huge goals. Concentrating too much on the road ahead makes it easy to succumb to feeling like a loser, crummy and uninspired, because we haven’t reached that big goal yet.

Psychologists Teresa Amabile and Steven Kramer discovered how this kind of perspective that ignores the present and past causes you to miss out on an important source of motivation. Through copious research over a decade, Amabile and Kramer uncovered the power of the progress principle. The most powerful motivator is something quite simple — making progress, including small wins.

Recognizing your small wins is like filling up the gas tank to keep making wins tomorrow, creating a positive feedback loop that sustains and energizes you to keep going rather than give up. Advice on changing your habits often includes suggestions to start small, which helps you get started. Starting small also allows you to build progress and momentum that will keep filling that tank.

In writing about how to become an expert, Wistia CEO Chris Savage illustrates the importance of perspective in sticking with your goals.

Only focusing on huge goals is demotivating: In contrast, magnifying your point of view to recognize smaller steps forward and smaller chunks of progress makes it possible to harness the progress principle: When you track, measure, and recognize your progress, no matter how small, you’ll be able to build a sense and history of momentum that makes the process more enjoyable and keep you going when things get tough.

Tracking your progress and taking stock of how you’ve been doing is also an opportunity to figure out what’s working and what isn’t, which reframes failure into something positive instead of a reason to quit. People who believe they can learn from mistakes and failure improve their awareness and thus performance because they’re learning how to get better.

When you take time to learn from failure, you flip weakness into strength, and that learning you gain about how you can improve is also motivating. As James Chin writes, that flip is important to your psyche:

It’s an old relationship cliche that you should never go to bed upset with your significant other. Waking up upset the next day just serves to reinforce negative feelings you have between each other. Use this advice in your relationship to yourself…. It’s simple:  take time to create that positive feedback.

Going to sleep upset with yourself does impair your chances for success. As John C. Norcross and his team from the University of Scranton discovered in a 2002 study, people who were unsuccessful at keeping their resolutions within the first four weeks tended to rely on self-blame and self-criticism tactics as well as escapes from reality such as wishful thinking and threat minimization. (Successful resolvers relied on willpower, rewards, stimulus/environment control strategies, and positive thinking.)

Maintaining your resolution is tough, and nobody’s perfect. At some point, no matter how much progress you make and how much motivation you have, you’ll probably lapse and relapse. And when you do, the challenge is to get back on the horse rather than beating yourself up about falling off. 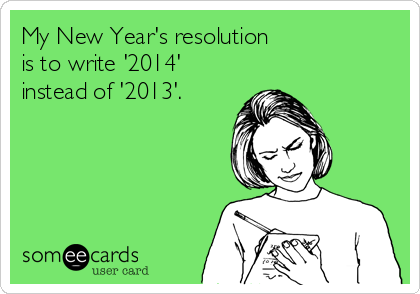 You can use implementation intentions as a tool for resilience. In general, implementation intentions provide a strategy for achieving goals using an “if-then” or “when-then” framework in which a consciously designated situational cue triggers a desired action. This planning technique of getting specific about where, when, what, and how — “If it’s 6pm, then I’ll go for a run,” or “when I get paid, I’ll deposit 5% into my vacation fund” — helps increase the chance that you’ll follow through.

Implementation intentions can be particularly useful as relapse planning. By forcing you to consider some potential setback scenarios or self-kindness allowances, you’ll have specific plans on hand to help when your willpower’s running low.

For example, if you’re trying to go for a daily run to get in better shape, form some if-then plans for bad weather like “If it’s cold and rainy outside, I’ll do some yoga or jump rope indoors for half an hour.” If you’re trying to eat healthier by cutting sweets and you’ve been teetering on the edge of attacking pints of ice cream, you could make a plan like “I’ll only eat normal-sized desserts if it’s the weekend” or “if I end up eating ice cream, it’s okay — I’ll just have one scoop.”

Don’t shy away from thinking about your weaknesses or how you might fail. Part of learning from your mistakes and failure requires self-awareness, which ultimately gives you more information for when you falter.

So you may be unsuccessful with your New Year’s resolutions, but that’s not the whole story.

As Norcross points out, despite the tragic chorus of public opinion that resolutions are destined for failure, “a considerable proportion of New Year resolvers do in fact succeed, at least in the short run” and making a resolution bumps up the success rate ten times, as compared to those who don’t make a pledge or resolution at all.

Resolutions can still work if you expand your thinking about them. Take advantage of multiple fresh-start opportunities, make mental room for failure, learn from mistakes, and celebrate your progress.What matters is that if you fall seven times, you stand up eight.
This post originally appeared on the iDoneThis blog. Image credit: Dan Moyle via Flickr.

About the blogger: Janet Choi is the Chief Creative Officer at iDoneThis and keeps the wheels of the iDoneThis blog turning. She is not a morning person. Follow her @lethargarian or on Google+.