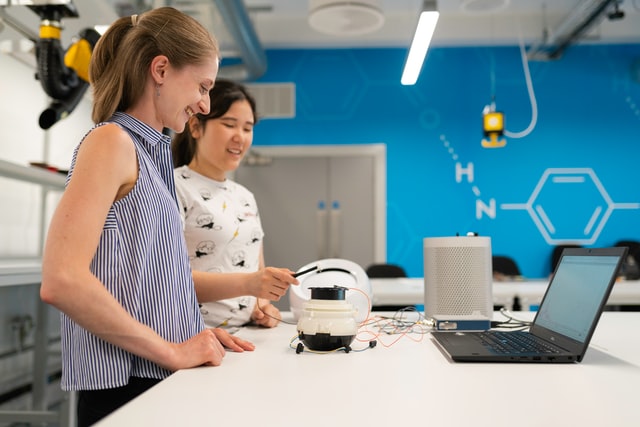 Photo by ThisisEngineering RAEng on Unsplash

It’s now long overdue for women thriving in technology to be the norm, rather than the exception. The numbers still highlight the frustratingly long battle we’ve got ahead of us, with The European Commission estimating that only 17% of IT specialists are female. In 2019, a staggering 91% of tech investment in Europe went to all male-founded teams. There are a number of components that contribute to this gender chasm in the tech sector, but one thing we know for sure is that fixing the problem starts long before an imbalance in the boardroom.

Untangling systemic issues is challenging, but it’s clear that from a young age children absorb countless cultural ideas about who they are, based on their gender. From TV shows to books, toys to dressing-up costumes, young children are persistently bombarded with distinct notions of ‘boy’ and ‘girl’. For example, The Institution of Engineering and Technology found that 31% of STEM toys are listed as items ‘for boys’, whereas only 11% are ‘for girls’.

Similarly, a number of studies have found that when asked to draw a scientist or mathematician, girls are twice as likely to draw a male figure than a female one, while boys almost always draw men (usually donning lab coats and glasses, epitomizing their narrow perception). The gendered messaging that children unconsciously digest is clearly both powerful and damaging. It becomes what is known in psychology as the ‘stereotype threat’: where negative stereotypes feed into an individual’s inhibiting doubts, which then have a direct and negative impact on their performance. The stereotype threat dampens enthusiasm and belittles self-confidence by telling children that their biology will dictate their abilities, pursuits and choices in life. For girls, this is hugely detrimental.

The repercussions of such messaging are particularly clear in relation to children’s career aspirations. Early and inflexible gender expectations sow the very first seed of imbalance in tech. It marks the beginning of the pipeline problem, and its effects are seen from education (according to the Campaign WISE, only 9% of female graduates in 2018 studied a core STEM subject) right through to boardrooms (a TrustRadius study found 26% of women in tech report being outnumbered by men 5:1 in business meetings).

So, we’ve identified the leak, but how can we stop it? While the likes of employment quotas and all-female hackathons are in many ways effective, they are ultimately too late in the game to fix the problem single-handedly.

A study by Google and Gallup highlights a key shift that happens in pre-teen years: it found that 12-year-old boys and girls share a similar interest in Computer Science, whereas by 14, only 12% of girls are still interested in Computer Science, compared to 47% of boys. This data is useful in identifying a key age group that we must focus on to bridge tech’s inequality. And in turn, it also gave rise to the target audience of my own company, imagiLabs.

As a STEM graduate myself, and fuelled by the disparity that I saw first-hand, in 2018 I founded imagiLabs: an all-female founded startup that teaches young girls to code. By providing girls with the tools and a supportive community to kick off their programming journeys, we are inspiring the next generation of female coders, helping girls realize their full potential and quashing the outdated idea that coding is a boys-only pursuit.

Since founding our startup, we have found that the following requisites are key for sparking interest and maintaining enthusiasm in our users:

The benefits of gender parity in tech are manifold. And it’s key to point out that they’d be felt by both men and women alike. A study by the European Commission found that having more women in digital careers could increase the EU’s GDP by €16 billion per year.

Although progress is being made, we still have a monumental challenge ahead of us. Everyone – from parents, teachers, advertisers and policy makers – has a significant role to play in laying the foundations of girls’ self-belief. It is only by debunking gender myths and challenging preconceptions that girls will be able to go forth and conquer in the world of innovation; much to the benefit of us all.