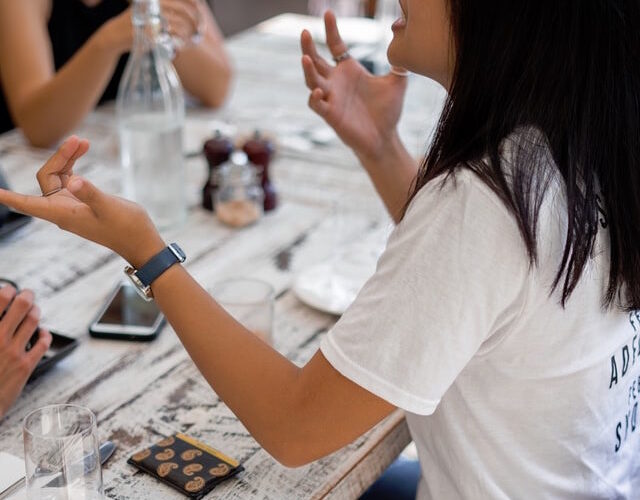 Your Reaction to Tough Conversations Doesn’t Define You. Your Response Does.

Suppose you and your spouse are getting ready to buy your first home together. You sit down to talk through all the features that matter, and five minutes into the conversation, your spouse says, “Why in the world do you want four bedrooms? We don’t need them.”

Chances are, you would feel defensive and disconnected. Or, you might feel angry, and those comments lead to a blow-out fight. That’s because reactionary remarks that only take one person’s wants, needs, perspective, and judgments into account can escalate the stressors and anxieties that are already present in both people in tough decision-making situations.

We all have reactions. They’re perfectly normal. But they don’t have to determine the direction the conversation takes. Good responses are rarely impulsive.

The first words out of your mouth establish the tone and tenor of your conversations. Thoughtful responses reduce the other person’s fear, increase understanding, and help both people connect. They also vastly improve the odds that you’ll get what you want. Maybe you don’t need a fourth bedroom after all. Thoughtful conversation could lead you to that conclusion, where reactionary remarks will just make you fight even harder to “win.”

When it comes to tough conversations, your reaction doesn’t define you. Your response does. I’ll  teach you how to separate the two, which will make it much easier to have profitable conversations that make both parties happy.

You Have Two Options

To learn this distinction, let’s role-play a scenario. Suppose your friend swings by and announces he just made 40 under 40. He’s being recognized and rewarded for his high-achieving, kick-ass self and all that he has accomplished at such an early age. You just turned 43. Nobody’s ever given you a trophy. You might be a skosh envious. Pretty normal and quite understandable.

Envy is a signal to you that you’re missing or wanting something that you are not getting. Perhaps you want more affirmation and praise for all of your hard work and efforts, or you’re feeling a little insecure and want to feel a stronger sense of self-worth. All relatable, all human.

The question is, how do you respond? You have two options.

Experiencing a physical reaction in your body when you’re involved in a tough scenario or conversation is normal. Having your throat constrict or your chest tighten is a natural response. It’s a sign that you care or are invested in some meaningful way. Whatever is happening has emotionally triggered something in you that is connected to your beliefs, values, or identity.

It’s also quite common to have an emotional reaction that’s not super mature, yet is still understandable. You’re human. You’re allowed to react. You’re allowed to be angry, sad, frustrated, stressed out, totally pissed off, envious…you get the idea. It’s how we express these emotions that matters most.

Your first option is to align your response with your reaction. You let your emotions get the best of you, and you say the first thing that comes to mind. You’re snarky, and you say, “That’s a paid award program, right? I mean, you paid, or your company paid for you to be featured, right?”

Here’s the thing: that reaction creates the precise opposite outcome of what you so desperately want. No one wants to offer you the praise and affirmation you seek when you’re acting like a jerk, and because you know better than to say such snarky things, you’re suddenly feeling even worse about yourself. Consequently, you’re now further away from what you wanted instead of closer.

Let’s admit it. Having a verbal reaction by saying something inappropriate, snarky, or downright inane is human. It happens to all of us, but it is also oh-so-not helpful. Luckily, it’s easier to override than you may think.

You are capable of biting your tongue or counting to six so you can pause before you open your mouth. Your verbal response is your choice. It’s under your control. You can’t always control your emotional or physical reaction, but you can choose your words.

Here’s the key to the second option: pause. Before you react, count to six using the one one thousand, two one thousand methodology, and by the time you’re done counting, you will be much more likely to respond thoughtfully than to blurt out words you’ll later regret.

Take a deep breath, and acknowledge to yourself that you’re a little envious. You tell yourself you’ll deal with yourself and your envy later. It may be brief, but that pause is powerful.

By breaking the reactive flow, you can now respond out loud with a supportive comment, such as “Dude! Congrats! First round is on me!” and begin teaching yourself how to better deal with envy. With this response you are positively affirming your friend’s accomplishment, creating connection, and building a better relationship. Most likely, you’re also feeling better about yourself because you responded maturely and magnanimously.

Your Words Can Help or Hurt

It’s important to keep in mind that your responses will either hurt or help. That’s it. These are the only two options you get. There’s no such thing as neutral. Whether it’s a daily grind conversation about buying toilet paper or a high-stakes critical conversation such as buying a house, everything you say will hurt or help.

When you react out of instinct or bad habit, you’re inviting even more bitterness, snarkiness, or envy. The conflict then escalates, and by the time it’s over, no one will get what they want. These conversational bad habits often create undesirable outcomes.

If you make the effort to respond thoughtfully, though, your responses will help. They will invite compassion, understanding, and a desire for resolution.Your responses will chart the course of the conversation and determine how it ends and whether or not you get what you want.

For more advice on responding to tough situations, you can find Get It on Amazon.