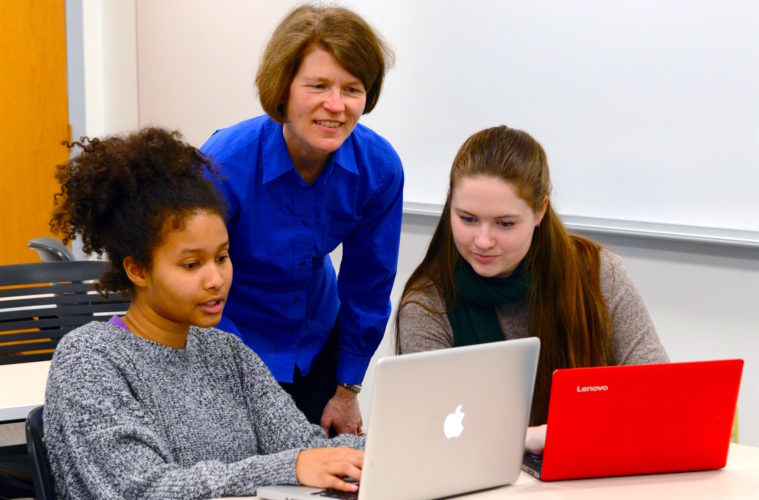 Only 20% of engineering graduates are women, but Dartmouth’s Thayer School of Engineering made history in 2016 when over half of the students receiving a bachelor’s degree in engineering were women. Dartmouth was the first national research university to accomplish this feat, and professor and instructional designer Petra Bonfert-Taylor, plays a major role in achieving gender parity in this area.

However, Bonfert-Taylor’s work is not limited to the walls of her Ivy League school. In fact, she was named the 2018 Tech Teacher of the Year by the New Hampshire High Tech Council’s TechWomen | TechGirls Committee.

In addition to being the web editor of the International Mathematical Union’s Committee on Women in Mathematics, Bonfert-Taylor’s Washington Post op-ed, “Stop Telling Kids You’re Bad at Math,” was a wake-up call that theses types of comments perpetuate math skills as unnecessary and hard to understand, and also contribute to math phobia among students.

Bonfert-Taylor is a mathematician by training. She earned a PhD at Technical University of Berlin, and then spent three years as a postdoc at the University of Michigan. Bonfert-Taylor accepted a tenure track position at Wesleyan University, where she became a full tenured mathematics professor, doing research in geometric analysis and teaching undergraduate and graduate-level mathematics classes. “I published extensively, lectured widely to national and international audiences and received numerous research grants from the National Science Foundation,” Bonfert-Taylor says.  In 2015, she accepted her current position at the Thayer School of Engineering.

Support and Engage While Removing Barriers

Phobias, insecurities, and the absence of a strong STEM background have deterred countless millions of girls from pursuing STEM careers. However, Bonfert-Taylor has developed several programs to make engineering and math accessible.

She is a firm believer in broadening access to high quality, higher-level education – and as a mathematician, has an obvious fondness for this topic. “In the fall of 2013, I created a MOOC (mass open online course) entitled Analysis of a Complex Kind. In 2015, she added new materials and converted the course to on-demand mode: Introduction to Complex Analysis, on the Coursera platform.

“My goal with this course was to reach out to people around the world and spark in them a lasting interest and curiosity in a beautiful corner of mathematics,” Bonfert-Taylor explains.

“In partnership with Rémi Sharrock (Institut Mines-Télécom, France) and both of our institutions’ teams, I have developed a professional certificate program (consisting of a series of seven MOOCs) on the edX open online course platform entitled C Programming with Linux.”

The program recently launched (October 2), and she says the target audience is anyone interested in gaining an extensive foundation in C programming and Linux OS. “We use innovative in-browser recording and grading tools that make these courses almost as interactive as a ﬂipped in-person programming class.”

And, since students work exclusively in the browser, they don’t need to install anything, which effectively makes this a barrier-free introduction to coding.  Bonfert-Taylor understands that learning needs to be a hands-on process. “You can’t really learn to program by only watching someone else code: students need to be programming on their own while receiving constant feedback on their work,” she explains.

That’s usually an impossible task in an MOOC environment, but the course design and technology has allowed them to pull it off.

“I co-designed and am running this program with Holly Wilkinson, assistant dean of Academic and Student Affairs for Thayer,” she says.  The DEE program was designed to improve the first-year experience and retention of students entering Dartmouth who are interested in engineering. “As part of the program, we provide support and mentoring to these students – especially those whose academic background may not be as strong as that of others – to ensure they gain a solid academic foundation prior to beginning engineering courses.”

The program is evaluated and tweaked on a regular basis to ensure that it remains effective.  “We run nightly drop-in help sessions staffed by our compassionate TAs, special social events, advising events, and individual tutoring as needed.”

This course was redesigned to incorporate active learning, such as pre-class videos, and in-class programming exercises. A second redesign resulted in a revised curriculum sequence and new, in-class activities. “The goal is to improve retention, especially of underprepared students.”

“This is a new course, taught first in fall 2018, with the goal of improving retention in the engineering major among underprepared students.” Bonfert-Taylor says students are introduced to a variety of mathematical concepts and math is used to solve engineering problem, as opposed to focusing on derivatives and theory. This course doesn’t replace any of the existing courses. Instead, it sets a context and through a discover-based lab, allows students to get hands-on experience, learn to use MATLAB and write reports.

The Importance of Women in STEM, Female Mentors, and Role Models

“In order to keep making scientific advances at the highest level we need to tap into our entire talent pool, not just a pool dominated by white males,” Bonfert-Taylor says.

She explains that scientific research typically involves groups of scientists collaborating, and progress tends to involve a diversity of perspectives. “A diverse team of scientists will look at a problem from a diverse set of angles and thus ask a diverse set of questions,” she says. “Such thinking opens avenues and doors for exploration which is often instrumental in breakthrough discoveries.”

But, to reach that point, we need diverse mentors and role models. “We all need to see confidence, leadership and accomplishment in people like us in order to be able to envision ourselves with those qualities.”