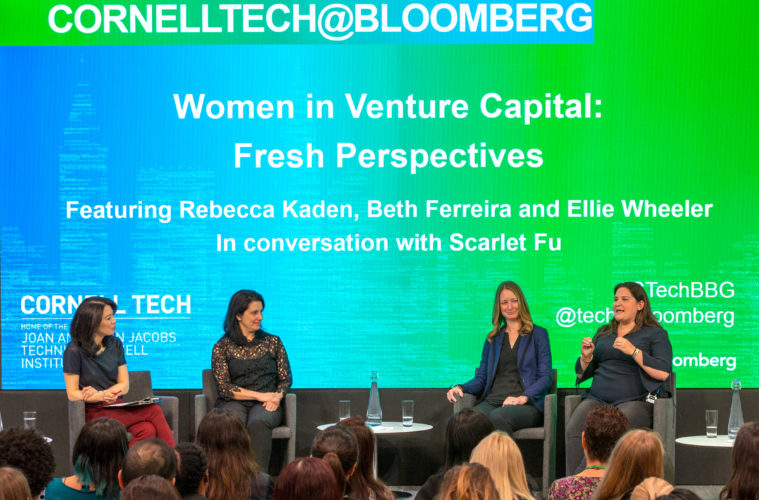 In a recent Cornell Tech@Bloomberg event in NYC, Women in Venture Capital – Fresh Perspectives, we were able to hear from three investors about their personal journeys, as well as their advice for addressing the gender gap by cultivating inclusive environments across the venture community and technology sector to engineering and entrepreneurship—all of which have seen under-representation on the diversity front.

There’s no one path to being an investor.

In response to a question on whether there was a particular advantage to having been an operator or an investor as a VC, all the panelists agreed that there was no single path.

“It doesn’t match a career path, and there are different types of people who become VCs. You’ve got to understand markets, know how to create relationships, and have a broad outlook, but how you get there isn’t set in stone.” – Kaden

The VC cycle is changing

The VC landscape looks good right now, but it’s definitely changing in terms of types of capital, company stages and general conception of what “VC” even is.

Things are good, but there’s different money coming in and at later stages. Companies are delaying going public, and there’s a lot of early-stage activity. We won’t know for a while what it looks like.

Since late 2014, analysts have been saying that there will be a market correction, but we won’t know until this investment cycle plays out in 5-10 years.

“What makes an early-stage-VC backable company? At one time, it was whether the company had a defensible asset at the time of capital raising. The demand is shifting now to focus on business fundamentals, and having a fully functioning product isn’t necessarily needed.” -Ferreira

These investors have their eyes on a few different areas.

Ferreira thinks ecommerce is under-hyped. There are things Amazon doesn’t do well—discovery, branding, quality—that entrants could take advantage of, and she’s seen it done well before. Additionally, curation, if you can do it right, can be powerful. Anything that limits a user’s need to choose is ultimately valuable.

Kaden looks more broadly at how knowledge and data can affect us and our lives, and she’s liking solutions that allow users to take more responsibility in their lives, whether it’s wellness, personal finance, etc. She likes to see where money is starting to go that it wasn’t flowing to two months ago, like shared wallets.

Trends are great, but there are some things that are getting, well, just a little old.

For Wheeler, she thinks AdTech is a really tough call. It takes a lot to build a defensible business model in a space that’s noisy, loaded with corporate money, and is run by a small handful of old and new giants.

Ferreira finds AR/VR hard to get behind. There was a ton of money going into these companies, but it’s starting to taper off. It’s hard to build applicable, sustainable solutions around it.

All in all, New York is a pretty great place to be in right now from a startup and investment standpoint, but it’s definitely still in a maturing phase.

It’s a smaller industry, but more diverse in terms of the industries that are starting to show up. It benefits from having strong traditional industries like financial services, advertising and media already established … a luxury that Silicon Valley doesn’t have.

The community and capital are starting to converge, which is important, and a few stars—Flatiron Health, MongoDB—are setting the tone. These companies act as the crucial pillar companies that will help mobilize the space.

“Silicon Valley is the land of big dreams and irrationality. To some extent, that drives innovation. Do we have that here?” – Kaden

Being a woman VC

Well, things are getting better, slowly… but it’s still pathetic. This was a big head nod around the room. Men are judged on their potential, while women are still judged based on what they’ve actually done. This means work!

Even so, each woman had a positive outlook.

“Being underestimated is a big advantage in this game, and having interpersonal skills, which women are good at, gives us a leg up. We’re able to build relationships in different ways, and that’s a strength.” – Ferreira

Kaden agreed with this, saying that being memorable, which can sometimes be achieved just by being the only woman in the room, is a good thing.

“Having an investor table that understands nuances is so important to a portfolio. You can’t do that if everyone looks the same.” – Kaden

As you can expect, she’s not a fan of teaching women how to be more like men. Her other observation? There may be lower numbers of women in VC right now, but the ones there are absolutely top quality.