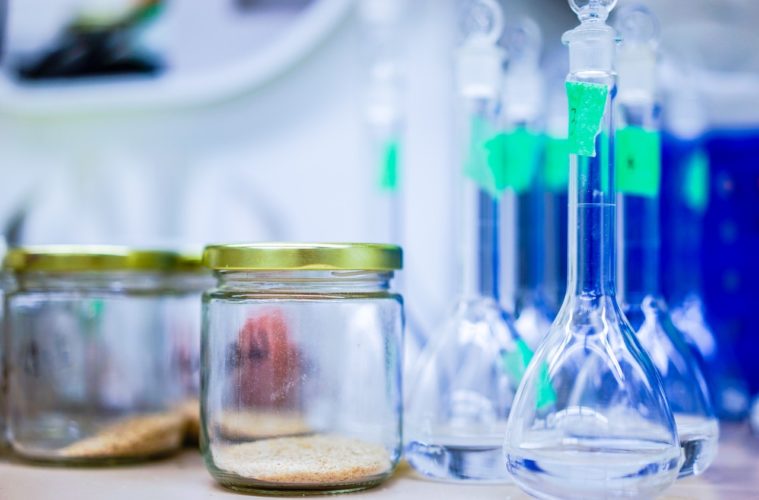 This is a homemade Plinko machine…complete with hand-crafted prizes. To play, you simply fork over 50 cents to my 11-year-old son and he hands you a Dixie cup with three tokens. (If you ask nicely, he might throw in an extra token.) 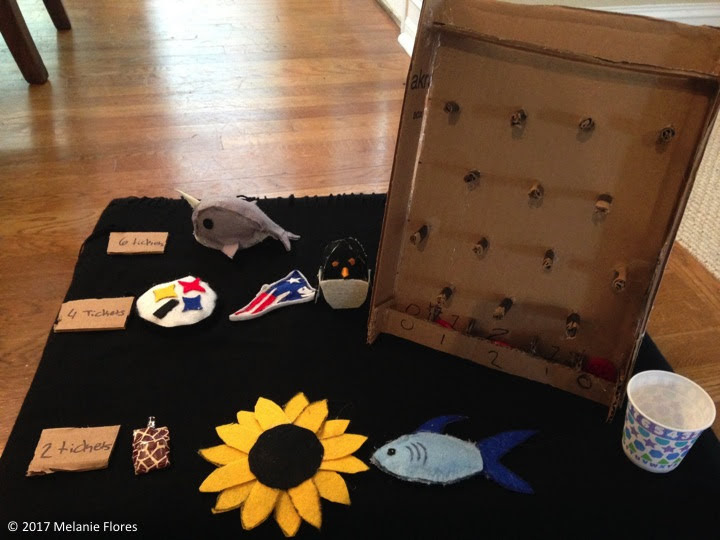 I’m not showing you this picture to show off his work, although I’m certainly proud of him.

I’m sharing it because this Plinko machine is a perfect model of the path a middle school girl navigates en route to a career in STEM.

And the sad truth is…like a token waiting to be dropped into a Plinko machine where slot 2 = a STEM career, she will likely land in one of the other slots because of social pressure.

Middle school is when kids begin figuring out who they are. The tween/early teen years are like a dressing room where they try on different identities. This is the time when girls start rejecting the “Girls in STEM” one….because they don’t think it “fits.” Or they don’t think it “looks right.”

How can we encourage them not to cast away the STEM path?

This was the question fellow female engineer Shantel Butler and I sought to address at SWE Atlanta’s Wow! That’s Engineering outreach event on November 4, 2017.  Speaking to dozens of parents of middle school girls, we opened up about our own experiences as girls in STEM, and shared strategies for helping today’s young girls navigate their struggles.

Middle school parents can support their daughters by shining three forms of light on the STEM path:

Help your daughter see that a STEM background empowers you to create virtually everything that is useful and helps people: not just the obvious examples like buildings, bridges, cars, cell phones, and computers, but less-obvious examples like inhalers, diapers, performance fabrics, etc.

Expose her to role models: not just adults, but other female preteens/teens. Peer pressure is incredibly powerful in middle school. While a girl may have great adult role models, NOTHING replaces having like-minded peers.

Girls start dropping out of the STEM pipeline when they feel alone. In 7th grade, my family moved from Florida to Virginia, and I became the nerdy new kid.

It was socially excruciating, to the point that I began to hate school. In 8th grade I began experimenting with different identities and taking cues from my peers and my environment. I noticed that physical appearance was a sorting mechanism at my school, so I begged my parents to buy me contact lenses. Maybe if I didn’t look like a nerd, things would improve. My mom said she didn’t get contacts until she was 15, so if I wanted them earlier than that I’d have to buy them myself.

So I saved all my babysitting money for months. And in the spring, I triumphantly presented her with an envelope of cash and an ad clipped from The Virginian Pilot. An optometrist at the mall was offering contact lenses and an exam for $99.

Losing the glasses, and gaining confidence, was the ticket to a new social life.

Kids who never gave me the time of day before would talk to me.

I got my first kiss.

It felt awesome to a 13-year-old girl who had been the pariah throughout 7th grade.

But to my parents’ chagrin, the girls I was spending the most time with valued fun, friends, and boys… and nothing else. If not for remarkable adult role models and a stroke of divine intervention — in the form of my dad’s transfer to a new naval base in Jacksonville, FL — I am not sure where my path would have led.

Role models are out there….like 14-year-old Anushka Naiknaware, whose TEDWomen 2017 talk blew me away. She invented a bandage that signals when it needs to be changed.

And a 9-year-old Californian named Samaira, who invented the board game CoderBunnyz to teach kids, like her younger brother, how to code.

And Reshma Saujani, the founder of Girls Who Code, who argues in her TED talk that we need to teach girls to be brave. Watch it, and then take your daughter to a screening of She Started It! so she can see real examples of five young females being brave in the business world. If you’re anywhere near Jacksonville, Florida, there’s a screening coming up later this month at the University of North Florida.

#3 Opportunities to Learn by Doing

In school, support teachers and programs that embrace hands-on learning experiences and give students the freedom to make mistakes and learn from them. Outside of school, connect her with programs like Girls Who Code, FIRST robotics, maker spaces, the Clubhouse Network, etc. At home, let her take the lead on home projects. For example, my husband and I had our boys install new hinges on our kitchen cabinets. The first child-led install was a bust, but they learned from the experience and fixed it themselves.

This image from my slide deck lists some resources for families: 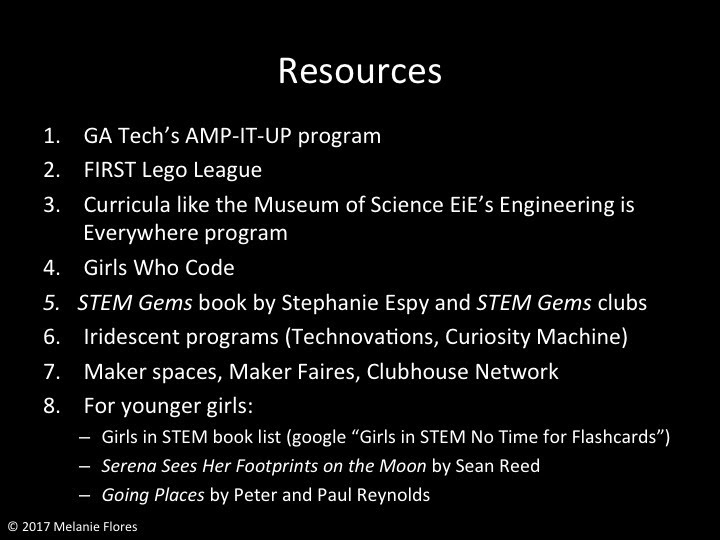 I will close with this message:

Parents of middle school girls, you’re reading this at a critical time. Your daughter is just now entering the Plinko machine.

As she makes her way toward her final destination — whether it is slot “2” or not — let’s strive to make that path well lit and intentional, and not the one of least resistance.

Melanie Flores leverages an engineer’s mind, a teacher’s heart, and a gardener’s hands to make an impact on STEM education. Her unconventional career path led her to found a nationally recognized kindergarten engineering workshop, and fuels her passion for empowering young people, particularly girls, to pursue careers in STEM.