Take it from our CEO, a confirmed hater of traditional networking, everyone can learn to enjoy and benefit from networking if you approach it the right way.

Let me confess, openly, honestly, authentically – I hate networking. The thought of walking into a big room to “further my career” “to pitch my startup” “to hire” “to meet my future co-founder” or “to connect with investors” makes me want to crawl under the sheet, stare at my phone, and make an excuse: “I’m so busy.”

As much as I hate it — loath the idea — I have still invested time into networking and, without an iota of doubt, I have benefited, furthered my career, met some of my best friends (OK, nearly all of you!) and have learned, been inspired, helped, supported, gave and received.

Let’s dissect this a bit, shall we? Why do I feel so hostile to “networking”? And how can my fellow networking haters learn to make peace with meeting new people in a professional context?

I Work on My Own Time

As a child I began as an introvert and eventually evolved into the hybrid introvert/extrovert you see today. Rewind back to the age of 6, 7, 8 years old, and I actually was scared of people. (I know, blasphemy! Especially for those who know me now.) We would go over to our family friends’ house – imagine five families with ten or twelve kids jumping around the basement, screaming, playing. Where was I? Hiding in the sitting room with the adults who were drinking tea and biscuits (chai and kara biscuit) for about an hour until I was comfortable. In fact, I remember hanging on to my father’s leg for dear life! Then, after an hour or so of boredom with the adults I was ready! I would sneakily join the rest the kids to play. It took me time to settle in, and show my true self. I worked on my own time, slowly but surely.

“Fine” Really? Are you really “Fine?” The question, “How are you?” Is actually quite loaded! When you answer “Fine” I know that’s not the entire story. To know “HOW” someone is, you need to, I think, begin with first knowing “WHO” someone is. In reality — I want to know WHO you are and what motivates you. I want to know WHY you do what you do. I want to know WHAT you desire. I don’t really care to know, “how are you?”, because that is just a moment in time. I care about deeper things. I care about the foundation of you, the person behind the smile. Networking at a typical networking event doesn’t always make room for that. Well, that is, unless you try to make it otherwise.

Following Up Is Hard

When I do network, I get into deep conversations with one or two people at a single event. Instead of asking “How are you” I often say, “So, who are you? Tell me your story. Tell me why you are here.“ These questions lead down a twisty path, and often I am locked in conversation for 20 or 40 minutes. Then the intense conversation trails off, and it’s time to go home. I now know a lot more than expected about one, two, or three people – awesome! We exchange cards. I go home exhausted and I just forget to follow up — useless, really.

Who Will I Meet?

I want to always maximize every minute of every day. I fear at networking events I’ll only meet people who want to take something from me, not anyone who can give to me. I believe valuable relationships are real ones — and no real relationship has ever been built by being selfish. ‘Give before you get’ isn’t just a catchphrase. It’s really the only way to benefit from meeting new people. If, at an event, I’m only going to meet people who want to weigh me up for what I’m worth in the short-term, and barter whatever expertise or connections they have to get a piece of it, then I don’t want to attend. It’s that simple.

How I Push Past My Hesitations

I may hate the idea of traditional networking, but I also have to be honest. Networking has changed my life (literally). I’ve learned the most from networking, met my best friends, connected with icons, been inspired, been motivated — somehow I cut through all the things I hate about networking and found myself at your nearest event, trying to make the most of it! How did I manage this?

Force yourself into the scene. No one waits for you, so I did my best to think less and just walk! Walk into the room, walk toward the food, walk toward the bar. I just put myself in the scene and let the magic happen (didn’t try too hard). And what happened? Even when I knew no one, I met someone who was also doing the same thing, in line alone, hating networking. Perfect! Therein begins your first authentic conversation. “Gosh I hate these events.” “Yah me too” In swoops my authentic self, WHO are you really!? The rest is history. This whole experience kills item #1 and #2 as per above.

Follow up. OK, so let’s talk about follow up — yes, it’s really, really hard. I don’t think I’ve perfected this one just yet, so let leave this one until I have a good solution for you 😉 Perhaps the answer isn’t very complicated — just do it! That goes for me too.

Choose your events carefully. And the last problem — the question of who you meet — what’s the fix there? To avoid this problem, be selective about which events you go to to. Be very picky and don’t attend more than one event a week. It’s not worth the energy and time to be networking more than that. Besides, you have work to do!

Truly, it’s false if people tell you that the only people who go to networking events are takers. I’ve met plenty of givers, plenty of valuable people that have shaped my path as an entrepreneur. You never know who you will meet – always give everyone the benefit of the doubt (quickly that is, do that scan in five minutes!)

The truth is networking is what you make of it. If you go in giving, you will get. You will meet another person giving or a person getting – and that’s exactly what it’s about, giving and getting, authentically.

What’s your advice for more authentic, less painful networking? You can polish your networking skills at our upcoming conference. 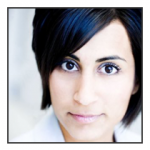 Shaherose is currently the President and CEO of Women 2.0. At heart she is a mobile and telephony junkie. She’s led new consumer products at Ribbit (BT). Previously, she was Director of Product Management at Talenthouse and JAJAH (sold to Telefonica/O2). Follow her on Twitter at @shaherose.