Think You Have What It Takes To Start A Business? (Triptrotting) How to convince a software engineer to join your early-stage tech startup.
By Edward Kim (Senior Engineer, Triptrotting)

Almost once a week, I get a random phone call, email, message, etc. It goes something like this: “Hey Eddie, I’ve got this million dollar idea. I just need a programmer to make it.”
Before I go on any further, if you’re an engineer, I’m sure this already sounds familiar to you.
“I checked and there’s nothing like this out there. It’s sort of like Facebook but better. It’s like Facebook meets Twitter meets Google! Well? What do you think? We’ll go 50/50 on this. You handle the programming, I handle the business side of things.”
“Do you know what 1% of Facebook is worth? We’ll become billionaires like the Facebook guys. We’d make a good team.”
“I know this guy that knows Elijah Wood. I can get Elijah Wood to promote our product. We’ll get a million users overnight! It shouldn’t take you too long to build something like that right?”

I’m sure this sounds familiar to many of you…

The truth is, your “good idea” is worthless. If you think I’m wrong, imagine walking into the Honda corporate office and pitching this: “Listen. I’ve got an AWESOME idea. Let’s create a Honda Civic that can fly and runs on flex fuel! We’ll go 50/50 on it. We’ll be disruptors!”

Lots of people say they will handle the “business side” of things, but do they even know what that entails? They obviously asked me to be their partner because they know I am capable of building the product… but what have they proved? 9 times out of 10, they have no startup experience and no track record. Even if they have an MBA, it doesn’t impress me. To rashly claim they’ll “handle the business side of things” is an insult to the engineer and to the true businessmen/women out there that DO know what they are doing AND have a proven track record.

To top it off, can you afford to pay your engineer? If not, ALL the risk is on the engineer’s side. If the product sells, great. If not, you’ve lost nothing. Programmer time is NOT cheap, my friends. With Google and Facebook competing to swoop up all the engineering talent, salaries have been rising fast. Even the mid-level engineers at Google are earning salaries of $250k and up. If you’re pitching to an engineer to join you, you better have a REALLY compelling reason.

Needless to say, I am extremely picky when choosing my partners.

So why did I join Triptrotting?

In August of 2009, Aigerim Duiseneyeva and Shana Zheng came up with the idea for a website that connected travelers with hosts around the world. They were two USC graduates with backgrounds in banking and were clueless about starting a business. So what did they do? They went to Google and searched “how to start a business”.

No joke. Can you believe that? A person that isn’t afraid to ask will receive answers. Their first version of the website wasn’t a website at all. Rather, it was a shared Google Spreadsheet document which they used to manually introduce travelers to hosts.

Now, of course they needed a REAL website. However, neither of them knew how to program. Finding a programmer is not easy. Rather than waiting around, Shana was determined to do it herself and enrolled in a HTML class. Shortly after, they met a few inexperienced engineers who wanted to be part of the project. After about a year of development, they built an incomplete, buggy, and “rough” website spaghetti coded in JSP. They weren’t ashamed of their website, and they shared it proudly… They engaged in tech events, angel events, investor meets, and even joined startup competitions. They even attended awkward tech parties where all the other attendees were nerds!. Eventually, they got introduced to Bill Gross (Idealab). Even with their incomplete website, Triptrotting got Bill Gross’ attention and became one of Triptrotting’s first investors!

Most people relax after receiving their first round of funding. Not Aigerim and Shana. They understood that raising money was not the end, but the beginning. They CONSERVED their money. Aigerim lived with her parents. She drives a humble Toyota Corolla. Shana paid for rent by utilizing AirBnB. They never ate out. They paid themselves a ridiculously small salary and set aside enough money to hire a full time engineer and pay for marketing expenses.

This is around the time I met Shana and Aigerim. I knew nothing about them. When I first talked to them about Triptrotting, I was unmoved. Most online startups without a tech DNA are doomed to fail. They asked me to be their systems architect. They offered me equity, but I took a position as a contractor. It worked because I hated commitment and they needed their website built. I was prepared to complete the website using JSP. But once I SSH’ed onto the server and checked out the source code, I realized the code was complete garbage.

I can ignore the fact that it was written in an outdated language.

I can ignore the fact that there was no MVC separation of layers. I can even fix the code that was responsible for storing passwords in plain text. But what I couldn’t ignore was the fact that I was able to perform an XSS attack, a SQL injection attack, and even a (God knows what it’s called) attack where I can make Tomcat fail to parse and output the .jsp file like a text file so that it can reveal to the world what their database credentials are… because of course, they placed the DB connection bits of code in the very same page as the HTML. There was even the issue of a user upload filename collision!

After assessing this, I made the decision to recreate the website. This time, it would be written in PHP using the Codeigniter framework. The challenge I was faced with was that they “absolutely needed” the site to be launched in exactly 3 months. We didn’t even have the new designs or wireframes.

So, I started working on what I could work on with what little information I had. I needed wireframes, so Shana downloaded wireframing software and quickly learned how to use it. She produced some of the best, most comprehensive wireframes I’ve ever worked with. They trusted me and gave me what I needed. If designs lagged, they would complain. When I needed the payment gateway, they registered. When I needed servers, they purchased. They were supportive, and I code fast. I delivered the site in 88 days… 2 days before deadline. 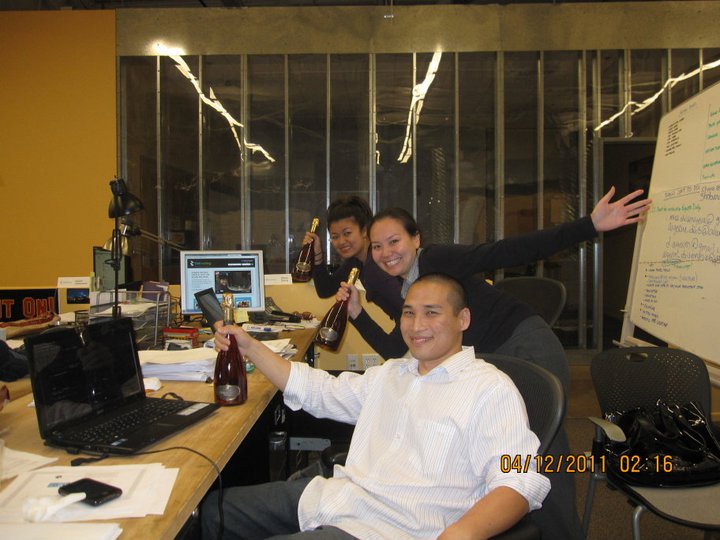 They couldn’t afford to hire a PR team, so Aigerim and Shana contacted the press themselves. Soon, there were articles about Triptrotting being published in several reputable sources. They hustled. Through hard work, the number of registered members, Twitter followers and Facebook Likes grew exponentially.

These two girls sacrificed their social lives. Their nights and weekends were devoted to Triptrotting. At the Idealab office, they were the first ones in the office every morning, and the last ones out every night. Even when funds were tight, they persisted. Shana and Aigerim went through a stretch where they paid themselves NOTHING. They got the attention of Mark Suster (Launchpad LA) and raised their next round of funding through Launchpad. They engaged in many meetings with many investors.

A day before their scheduled meeting with Google Ventures, Shana had an “AHA” moment. Her new idea would drastically improve Triptrotting’s business model and it would change the way they described the business. They needed a new deck and a new presentation. This was no time to make last minute changes, but they improvised.

Shana, not being an expert in Adobe Photoshop, used Microsoft Paint to design a mockup of the new Triptrotting feature. Funny right? Well, this mockup was good enough to excite Google Ventures.

Just 1.5 years ago, they were clueless, Google searching “how to start a business”.

Today, Triptrotting has raised $1 million dollars in funding from some of the biggest names in the tech industry: Google Ventures, Mark Suster, Bill Gross and Dave McClure.

So why Triptrotting? Because of the team.

Shana is a true hustler. She is incredibly resourceful. Aigerim is a shark. She won’t accept defeat. Shawn, our tech co-founder is extremely persistent and always positive. He always loves a challenge. To top it off, the Launchpad LA office is incredible. It’s an office full of hard working entrepreneurs that love to help each other out.

Working with hard workers keeps me motivated as well. Now THAT is how a CEO/founder/ should be. By all means, Triptrotting isn’t near the finish line… but with founders like these, there is no doubt in my mind it will get there. What can all entrepreneurs learn from these two?

You need to understand the importance of time. You need to swallow your pride and get your hands dirty… real dirty. You need to be humble enough to ask for help. You need to be able to conserve your money and sometimes, live like a hobo. At the same time, you need to believe that nothing is beyond reach.

So I ask you again. Do you think you have what it takes to start a business?

If you’re starting a business and you’re comfortable while doing it… you’re doing it all wrong. Just ask these two. They’ll tell you.

P.S. If you are a driven, disciplined, hard worker… and you’re interested in working with us at Triptrotting, contact me.

This was originally posted at Cranklin.

About the guest blogger: Edward Kim is a Senior Engineer at Triptrotting. Eddie is self-taught through books, text files, online tutorials, and sheer trial/error. He began programming in Basic at the age of 9. He started coding in C and Pascal at age 12. By age 13, he was learning to code in the 80×86 assembly language and used that knowledge to reverse-engineer the copy protection schemes in video games. He has held roles from Programming Director to Senior Engineer.